War and peace in Dante

This volume opens with John Barnes exploring how Dante’s views on and experience of war are reflected in his literary works. Joseph Canning, addressing Dante’s justification of the authority of the Roman Empire, assesses the compatibility of the poet’s view with established just war theory. Hannah Skoda demonstrates that in Inferno Dante seems to dwell on a paradigm where war produces discord, tumult and chaos. John Barnes then suggests that the episode at the gate of the City of Dis has much in common with a siege. Stephen Milner highlights the polar opposition between the stance of the rhetorician Brunetto Latini and that of the exiled poet who had no use for rhetoric in any true rhetorical situation. Spencer Pearce, shifting the focus to inner conflict, delineates Dante’s project of self-creation, finding it modelled in the experience of the souls in his Purgatory. Matthew Kempshall traces Dante’s theoretical understanding of peace back to a particular reading of Aristotle and Augustine which he shared with Remigio de’ Girolami. Elena Lombardi probes Dante’s engagement with various forms of peace, investigating how peace may or may not be a satisfaction of desire. Vittorio Montemaggi argues that the full boldness and complexity of Dante’s presentation of peace in the Commedia is best appreciated from a theological perspective. Lastly, Pamela Williams, comparing Dante’s view of Christian peace with Petrarch’s, finds that it embraces both heavenly peace and an aspiration of the Church Militant.

The main area of John C. Barnes’ research includes medieval Italian historiography, Dante, and other aspects of medieval Florentine culture. Daragh O’Connell has devoted his scholarly endeavour principally to Sicilian literature of the Ottocento and Novecento as well as to eighteenth-century Neapolitan intellectual culture and to the poetics of Dante. 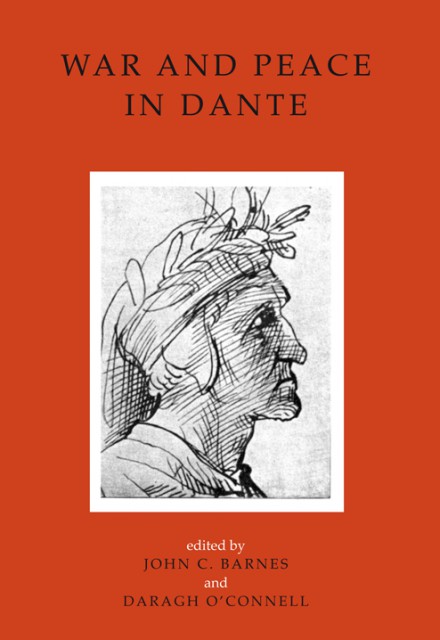