'As this brimful and abundant collection shows as a whole, this very readable essay demonstrates the immense benefit of using the written evidence of history both to extend and to limit our interpretation of literature.... [T]his volume will be keenly fought over in libraries by both researchers and undergraduates', Jenni Nuttall, Review in English Studies.

‘This substantial and engaging volume honours a scholar whose unstagey expertise and ability to think beyond critical categories have benefited many students and colleagues, a distinguished sample of whom are involved here', Times Literary Supplement.

‘This grand volume offers a fitting tribute to an eminent and influential scholar, whose work has spanned the medieval and Renaissance periods …. Twenty-four brief essays, by a range of impressive scholars … this volume is carefully edited and produced', Medium Aevum.

‘The twenty-four essays gathered here span literary criticism, manuscript studies, codicology, and intellectual, cultural and political history. The contributors combine detailed textual reading with historicism, continuing the investigation of the interface of late medieval literary texts with their historical situation which ahs been the hallmark of Scattergood’s own academic oevre. The quality of festschrifts can be uneven, but it is hard to fault any of these essays. Equally, their coverage of major texts ensures that this collection’s value transcends the merely ornamental to constitute a credible library purchase for undergraduate reading lists', Margaret Connolly,
Journal of the Early Book Society (2007).

‘Ancient and medieval literatures have more than simple antiquarian interest, and those who study them and keep their traditional alive deserve to be recognized. The publication of a festschrift represents one way for peers to recognize a colleague’s accomplishments, and [this book] pays a well-deserved tribute to a major scholar who has not only contributed to the fields described in the title but who has helped to determine the ways in which scholars approach these fields. And Professor Scattergood should indeed fell honored, not only by the admiration and affection expressed in so many of the essays but by the high quality of those essays … the collection [has] the feel of a true scholarly conversation … the effect is like that of a beautifully constructed Latin sentence, in which all of the elements work together to create a periodic whole … the essays in this collection are almost without exception instructive on the topics they cover, and those topics range widely indeed … a stimulating book … the authors have not solved insoluble problems, but they have provided new and interesting ways for us to think about them in relation to specific works … the ongoing meditation on the relationship between literature and history should be of interest to scholars of any literary tradition', Theodore L. Steinberg, International Journal of the Classical Tradition (June 2008). 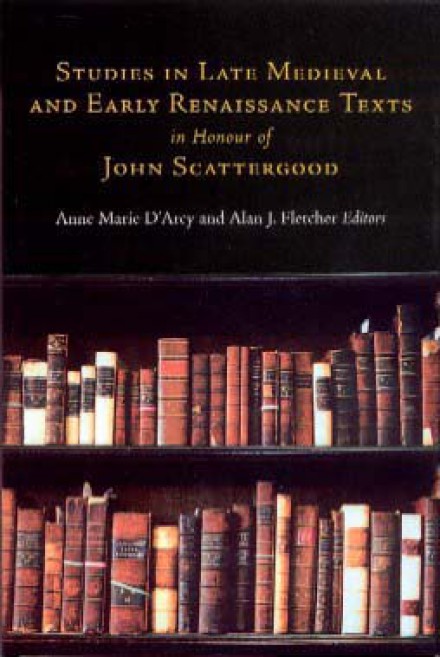