Marsh's Library: a mirror on the world

‘The book is more than just a history of the library as it considers its establishment in the context of the British cultural sphere of the time, takes in the role of bishops as legislators, and other broader issues … This collection of essays brings to the fore the cultural significance of Marsh’s Library and places it in the broader context of Ireland and beyond in the seventeenth and eighteenth centuries', Books Ireland (summer 2009).

‘The title of this volume, which contains the papers presented at a conference held in 2007 to commemorate the tercentenary of the act of parliament which established Marsh’s Library as a “publick library for ever”, perfectly encompasses the range of contents held therein … Marsh’s magnanimous gift of a public library for which he paid himself and to which he willed the income from a holding in Co Meath is to his lasting credit … The volume includes more for the bibliophile than can be discussed here … Many of the essays cross reference, thereby adding to the value of the overall experience of reading this book which is aimed at a scholarly audience but should appeal to those interested in history, in 17th- and 18th-century Dublin, and in bibliography’, Siobhan FitzPatrick, Irish Times (June 2009).

'‘This nicely produced volume of essays emanates from a conference held in 2007 to mark the 300th anniversary of Marsh’s Library, founded in Dublin by Archbishop Narcissus marsh and now one of Ireland’s most valued historic libraries … These substantial and well-written articles will be welcomed by researchers in the various fields they embrace, and should certainly be on their lists of necessary reading', David Pearson, Times Literary Supplement (September 2009).

‘There is much here, on the function of bishops as legislatiors in the old Irish House of Lords for example, on the origin and role of the Huguenots (one of whom was a donor and the first librarian of Marsh’s) and on the location of learning in the mid-eighteenth-century … This excellent series of essays echoes the spirit and endeavour of Narcissus Marsh', Roy Johnston, Books Ireland (November 2009).

‘Marsh’s Library continues to evolve over 300 years after its foundation and remains a vital source for learning today. The scholarship contained in this most learned volume is testament to that. I would heartily recommend it to those interested in bibliography, the history of the period or to anyone interested in learning more about intellectual life in Dublin in the seventeenth and eighteenth centuries', Julia Cummins, An Leabharlann: the Irish Library (March 2010).

'This collection of essays celebrates one of Dublin's finest institutions and indeed, one of national and international importance. As relatively little attention has been afforded to Ireland in the 'Enlightenment' ... this volume is a major contribution to addressing this void', Michael Merrigan, Ireland's Genealogical Gazette (May 2009).

‘The main strength of this book lies in its multifariousness, with all the papers combined highlighting different factors influencing the eighteenth-century culture of improvement. The essays will appeal to a wide range of eighteenth-century Ireland scholars, whether their interest lies in the history of the book, the church, ideas or politics. In addition, it will also appeal to those researching the circulation of ideas and people between Ireland and Europe. Readers will rediscover people and places they are familiar with; they will also come across lesser-known figures and sources which could provide them with new material for their research', Allison Neill-Rabaux, Eighteenth-Century Ireland (2010). 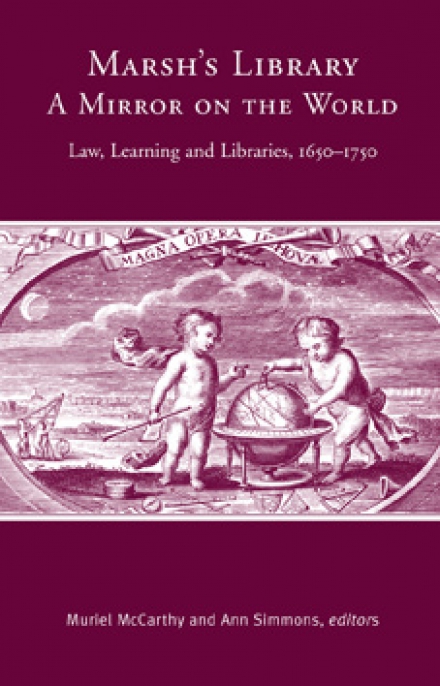