Dante and the Seven Deadly Sins

This volume opens with the bold suggestion that the seven deadly sins constitute a key to the structure of Inferno and Paradiso as well as Purgatorio. It ends with a discussion of cowardice (not strictly a deadly sin) in Inferno III, followed by a look at Dante himself in the light of all the capital vices. In between, each of the seven is focused on in turn. Intellectual pride is cited as the reason for Cavalcanti’s absence from the Commedia, while – separately – the pride cantos in Purgatorio are read as a reconstruction of the individual’s passage from pride to piety. Envy is located in the political sphere and shown to be almost always figured in conjunction with other vices whose sinful acts it prompts. It is then argued that Dante clarifies problems encountered in medieval attempts to distinguish between just and unjust anger. Sloth in the Commedia is explored next, with particular attention to Statius, its only named exponent. The poet’s understanding of avarice is placed in the context of the revived money economy and the papacy’s inflated temporal pretensions, while that understanding is, secondly, viewed in relation to the ancient Romans. Gluttony occasions reflection about analogies between the body and the book, as well as remarks about illustrations of the gluttons’ aerial bodies in the Commedia’s early printed editions. The ambivalence of Dante’s principal representations of lust is seen to imply a tension in his great poem between love poetry and spirituality, a tension he seeks to resolve in Beatrice.

Please see button at right for the Table of Contents.

The main area of John C. Barnes’ research includes medieval Italian historiography, Dante, and other aspects of medieval Florentine culture. Daragh O’Connell has devoted his scholarly endeavour principally to Sicilian literature of the Ottocento and Novecento as well as to eighteenth-century Neapolitan intellectual culture and to the poetics of Dante. 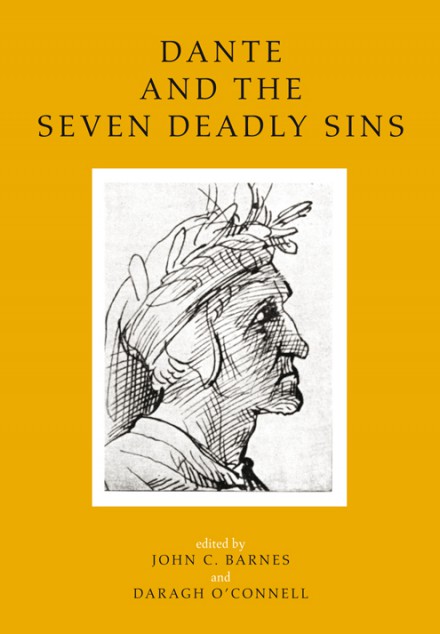