Dublin’s Ha’penny Bridge is one of the symbols of the city. Opened on 19 May 1816, the first dedicated footbridge over the river Liffey, it was also the first iron bridge in Ireland. The bridge was officially named after the first duke of Wellington, the Dublin-born victor of the Battle of Waterloo. It quickly acquired the nickname by which it is still known because it replaced a Liffey ferry which charged passengers a half-penny – and this amount was now charged to pedestrians as a toll to cross the bridge. The Ha’penny Bridge has had its share of controversy. In 1913 proposals were made to replace it with an art gallery designed by the famous architect Sir Edward Lutyens at the request of Sir Hugh Lane. The gallery would span the river similar to the Vasari Corridor in Florence. In the event, Dublin Corporation did not have enough funds for the project, so it was turned down. The Ha’penny Bridge was triumphantly restored in 2001.

This lavishly-illustrated book, the fourth in Dublin City Council’s series on engineering history and heritage, has been produced to mark the bi-centenary of the bridge. 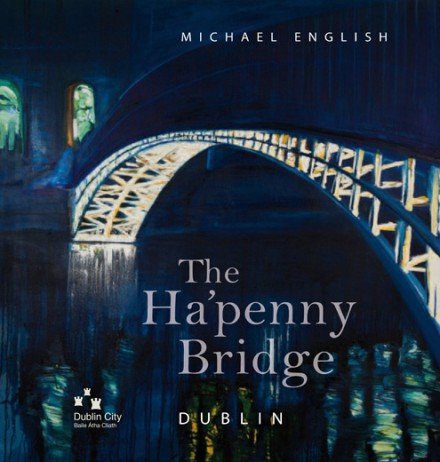