Envisioning Christ on the cross

Ireland and the early medieval West

‘An ambitious, important project … Envisioning Christ on the Cross achieves what its editors set out to do. It addresses diverse and sundry artifacts from a variety of geographical localities in a specific, organized, and deliberate way. And it assesses, in a methodical fashion, the complex relationship between the artefact and the audience meant to view it … The strengths of this book are many. The contributors are well established in their respective fields and have offered conclusions that are both compelling and well-written. There is a wealth of artifact genres under discussion in the text, including poems, homilies, gospels and legendaries, as well as physical artifacts ranging from manuscripts, stone tablets, funerary and monumental sculpture, ivories and, of course, crucifixes and crosses. Each of these categories is considered carefully in its own right and in terms of the cultural milieu from which it emerged. There are an extensive number of detailed plates and illustrations on offer, in colour and black and white, that effectively illustrate and accentuate the subject matter of the articles … Specialists in the fields of theology, palaeography, literature, art history and archaeology will appreciate the breadth of attention given to the pieces under discussion’, Shannon Ambrose, Eolas (2015).

‘A beautifully produced, skilfully edited volume … It is rare that a set of conference proceedings coheres so well and the editors, seventeen contributors and publishers are to be congratulated on producing an incredibly detailed, heavily illustrated, yet very accessible, tome on a fascinating topic’, Colmán Ó Clabaigh OSB, Journal of the Cork Historical & Archaeological Society (2015).

‘This splendidly attractive volume … The first thing the reader will notice about the volume is simply how exquisitely it is produced. At 370 pages and lavishly illustrated throughout, often with very vivid, high-quality colour images, it is remarkably keenly priced, retailing at just €55 … Felicity Harley McGowan opens the volume with an excellent article on the fifth-century Maskell Ivories with their cycle of seven scenes from the story of Christ’s passion … The second part of the volume also offers a number of excellent studies, most notably Michele Bacci’s insightful article on the Volto Santo … the quality of the production alone makes this a volume that every interested scholar will want to have and that no library should be without’, Salvador Ryan, Studia Hibernica (2014).

‘This is a truly fascinating book, with insights of all kinds, not merely what were the beliefs and practices of the early middle ages, but also other hints about how some forgotten aspects of the church then might be important to its very future … The book adopts a novel approach, rather than just treating the art objects as art objects, they are seen as expressions of a culture of belief and practice that is also found in poetry and in theology … The scholarship displayed in these pages is at a very high level … much in these pages will delight, astonish and dismay', Peter Costello, The Irish Catholic (October 2013).

‘This fine volume is a welcome addition to the scholarly literature devoted to images of Christ on the Cross … Illustrated manuscripts are served well in this volume … all the contributions in this volume, show how much we have learned in recent decades and challenge scholarship to continue to take into account the broad interactions and interconnections that may stand behind early medieval works produced in Ireland and elsewhere’, Lawrence Nees, Speculum (January 2015).

‘The subjects treated in this volume have been treated many times, but in disparate and unsystematic ways. The 17 essays in this book clear away a lot of underbrush, clarify some key issues, and point the way to future research … the contributors aimed for interdisciplinary breadth and this they achieved admirably … learned and valuable … handsomely produced’, Thomas F.X. Noble, Irish Theological Quarterly (2014).

‘In a series of excellent, nuanced contributions, the development of Crucifixion iconography is examined in the first section … In an equally impressive second section the interaction of text and image in prompting those contemplating Christ on the cross to inwardly reflect on their salvation is discussed’, Michelle P. Brown, Catholic Historical Review (Winter 2016).

‘This handsomely illustrated book takes a wide view of the connections between early medieval Ireland and the Christian West from the 5th to the 12th centuries … it offers many new insights and interesting conjunctions’, Elizabeth Coatsworth, Medieval Archaeology (2014). 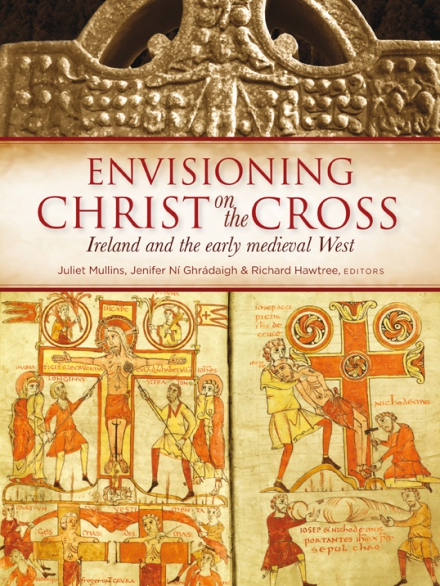