This is the second volume of Maynooth Aquinas Lectures. The annual series was founded by the late Professor James McEvoy in 1995. Its aim is to examine the thought of St Thomas Aquinas and his legacy with a view to exploring new aspects of his philosophical and theological writings, and to foster the interrelationship between the sapiential tradition and contemporary concerns. The present volume contains articles by established experts in the field as well as by some young scholars. The papers consider the Angelic Doctor as a teacher and examine this prolific scholar’s thought on a wide range of topics: the Eucharist, the problem of suffering, the meaning of being, Thomistic realism, Aquinas’ lost second Sentences commentary, virtue and the Beatitudes, and the four cardinal virtues as an ideal ethical basis for the practitioner-patient interaction in all its dimensions. The authors consider such questions as whether God thinks, and if we are justified in taking it for granted that Thomistic theology is superior to the theology of the Book of sentences. This book also examines Aquinas’ particular contribution to the Latin reception of Dionysian mystical thought and draws to a close with Heidegger’s thoughts on Aquinas and God. This volume makes a significant contribution to ongoing Thomistic studies in Ireland.

The late James McEvoy held chairs in Philosophy in Belfast, Louvain and Maynooth, was a member of the RIA and enjoyed a distinguished career as an outstanding scholar of Medieval Thought. Michael Dunne is Head of the Philosophy Department at NUIM, Dean of the Pontifical Faculty of Philosophy, St Patrick's College, Maynooth, and President of the Thomas Aquinas Society of Ireland. Julia Hynes is a visiting research fellow at the Centre for Public Health, School of Medicine, QUB, honorary clinical ethicist at Belfast Health and Social Care Trust and tutor at St Malachy's Diocesan Seminary, Belfast. 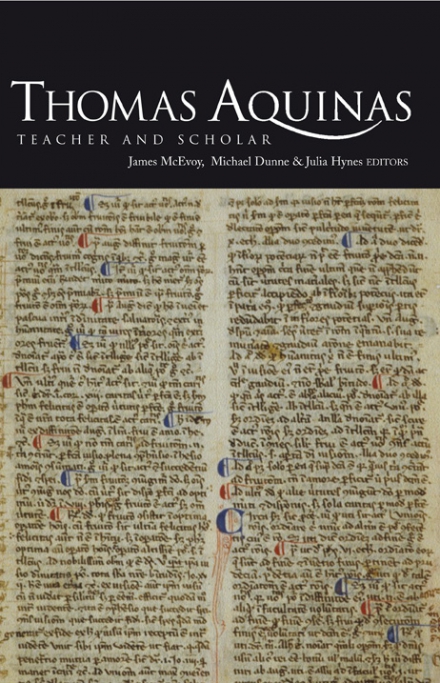