The Making of The Anglo-Irish Agreement of 1985

A Memoir by David Goodall

The Anglo-Irish Agreement (AIA) signed by Garret FitzGerald and Margaret Thatcher on 15 November 1985 was unique in providing a treaty-based arrangement for the government of a territory disputed between two States. In effect it gave the Irish Government an intrusive role in the processes of the government of Northern Ireland. Sir David Goodall, formerly Deputy Head of both the Foreign and Cabinet Offices, kept a personal journal throughout the negotiations from September 1983 to December 1985. He later transformed this into a single narrative account which has until now remained under personal and official embargo. His account is gripping and frequently astonishing in its frankness. He captures the heart-stopping fluctuations in the tide of negotiation between the two sides as it tottered continuously between collapse and survival under Mrs Thatcher’s dislike and distrust of Irish nationalism. He does not hold back from recounting the sometimes-dramatic exchanges between the two sides. Even more surprising perhaps are his accounts of the internal tensions on his own side: those between the Cabinet Office and the Northern Ireland Office at political and official levels and those between the Prime Minister and her own negotiators. This is an extraordinary account by a gifted insider of an historic negotiation to rival the diary of Tom Jones (Lloyd George’s trusted adviser) of the negotiation of the Anglo-Irish Treaty of 1921, and also recalling other classic accounts of diplomatic negotiations that have shaped the world.

The book contains a foreword by Maurice Manning (Chancellor of the National University of Ireland), and an introduction by Morwenna Lady Goodall. There are also contributions from Stephen Collins (columnist at the Irish Times), Michael Lillis (diplomatic adviser to the Taoiseach, Irish Prime Minister, Garret FitzGerald,  and David Goodall’s opposite number on the Irish negotiating team), Charles Powell (Mrs. Thatcher’s influential Private Secretary during the negotiations) and Robin Renwick (foreign policy adviser to Mrs. Thatcher and British Ambassador to the USA).

The editor, Frank Sheridan, is a retired Irish diplomat and, at the time of his retirement in 2014, was Irish Ambassador to Brazil. Earlier in his career he had served in the office of Dr Garret FitzGerald when he was Foreign Minister and as Private Secretary to Foreign Minister, Peter Barry, during the later stages of the negotiation of the Anglo-Irish Agreement of 1985. Following retirement, he completed a Master’s degree in Trinity College Dublin in contemporary Irish history, focusing on the New Ireland Forum and the period covered by the memoir of Sir David Goodall. He worked as a researcher on the film documentary John Hume in America and did research too for the late Seamus Mallon, former Deputy First Minister in Northern Ireland, for his memoir (written with Andy Pollak) A Shared Home Place.

Published by The National University of Ireland 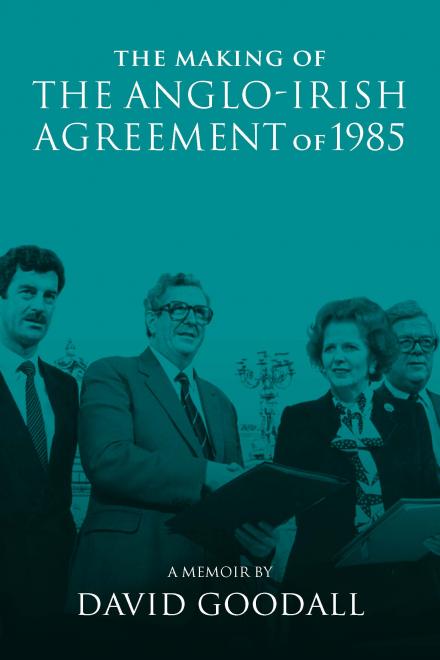