“Reading The early residential buildings of Trinity College, Dublin by R.A. Somerville was like being reacquainted with an old friend … He has trawled through the archives for this book, which documents in remarkable detail the making of the early buildings, now mostly vanished, and restores them to life ... Somerville paints a colourful picture of life in the college, from staff and student hierarchies, to entertainment, to preparation of food and the organisation of rooms within the residences, describing along the way the college responses to cholera and typhoid outbreaks as well as provision of fuel (oil and coal), water, and the transition from candlelight to gas and electricity … Somerville’s detective work is enhanced by his in-depth knowledge of the contemporary buildings … This comprehensive history is recounted with great affection and gentle humour. Throughout the text are panels which feature intriguing asides … This is a handsome tome, well-illustrated with maps, engravings, and photographs … it will provide valuable insight and much pleasure to those interested in the history of Trinity College and in the history of construction in Ireland.” (Sarah Cremin, Architecture Ireland, September/October 2022)


“Andrew Somerville's book is essentially the story of how the buildings which had occupied that space had been financed, built, occupied and then taken down and replaced. As the title indicates, this book is about the residential buildings, so it is not a study of the great collegiate buildings that now adorn Front Square – the Chapel, Examination Hall and Dining Hall - although of course these are mentioned. But if the focus is narrow the detail is rich …. [and] indicative of exemplary research and careful scholarship ... But this book is not just about buildings. It also has much to say about people – benefactors, builders, tradesmen, servants, surveyors - including the intriguing possibility that Charles Brooking, who was involved in the building of Library Square, was the same Charles Brooking who made the now famous map of Dublin in 1728. However, since this is a study of residential buildings it is, perhaps, appropriate that the last word goes to the residents and the final section of the book is largely devoted to them. Some became famous like Edmund Burke, and Oliver Goldsmith who scratched his name on a window pane (preserved in the College Library) while others, like Edward Forde, a fellow of the College who was murdered in his rooms in 1734, are less well remembered ... The Rubrics are the last remnant of the old brick built College buildings, and in the context of the 18th and 19th century architectural grandeur which surrounds them, perhaps look out of context to the uninformed viewer, However, Andrew Somerville’s masterly study provides that context and carefully details a of part of College life which has been little examined but which ought to be remembered.” Raymond Refaussé, Search. A Church of Ireland Journal, vol. 45.2 (Summer, 2022)

“Andrew Somerville's The early residential buildings of Trinity College, Dublin is a handsomely illustrated book from Four Courts Press, which will inform those who had the good fortune to reside in College rooms, of the places and people who preceded them.” Church of Ireland notes in the Irish Times (Saturday, 8 Jan. 2022) 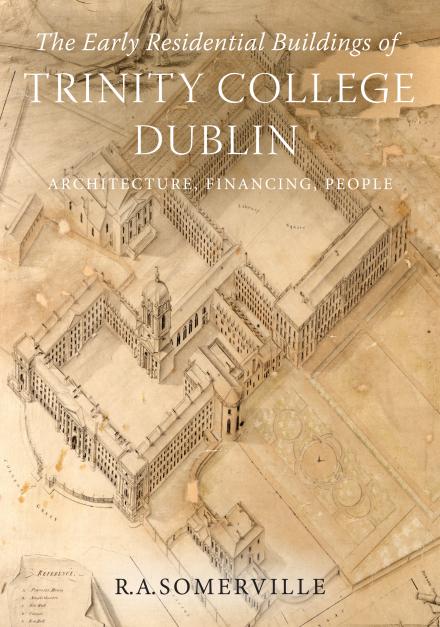