The Dublin Annals of Prior John de Pembridge

When the Dominicans arrived in Dublin in 1224, they established a house on the north bank of the river Liffey next to the bridge where the Four Courts are situated today. Anyone who wanted to enter the city of Dublin from the north, or leave across the bridge, had to pass the gate of the priory. It was in this priory in the mid-fourteenth century that a Dominican friar named Prior John de Pembridge wrote these Latin annals. This is the first modern edition of the annals of Pembridge (1162–1348), together with those of his anonymous Dominican continuator (1348–70). In 1884, in a two-volume work entitled The chartularies of St Mary’s Abbey, Dublin, Sir John Gilbert printed these Latin annals without an English translation. Gilbert’s was a rudimentary edition that did not make use of all available manuscripts. In this new edition, Bernadette Williams, the foremost expert on the Latin annals of Anglo-Norman Ireland, presents an authoritative modern edition of these manuscripts with facing translation. The annals, which cover the period 1162–1370, provide a unique window into the political, religious and social character of the city of Dublin, and Ireland more generally, at a pivotal moment in their history. The editor has provided a detailed textual analysis and commentary on the annals and their significance. The joy of these annals lies not only in the serious news recorded by John de Pembridge, but also in the vivid portrait of medieval life he offers – from the bakers of Dublin drawn at horses’ tails through the city’s streets for selling below-weight bread, to the mayor of Dublin who used his own money to build a marble cistern supplying water to the city, and the 500 whales washed up at the mouth of the Dodder that fed Dubliners during the famine of 1331.

Bernadette Williams holds a PhD from TCD, where she lectured in medieval Latin and the history of women in the Middle Ages. She is editor and translator of The Annals of Ireland by Friar John Clyn (2007) and The ‘Annals of Multyfarnham’: Roscommon and Connacht provenance (2012), both published by Four Courts Press. 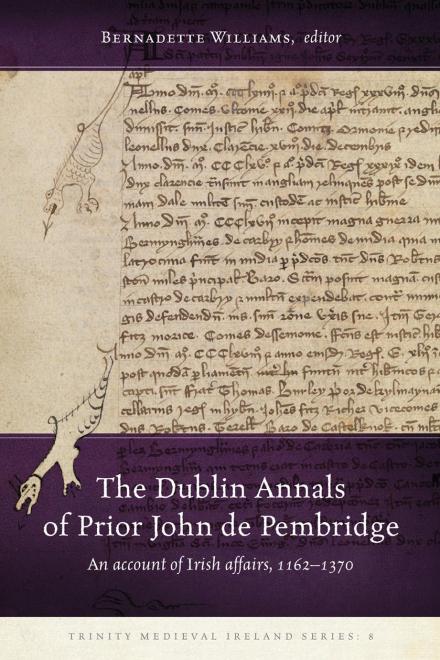