Magna Carta is among the most famous documents in the history of the world, credited with being the first effective check in writing on arbitrary, oppressive and unjust rule – in a word, on tyranny. The fame of Magna Carta spread as England, and later Britain, came to girdle the globe in its power. This volume in the Irish Legal History Society series is the first to examine the importance of Ireland in the story of Magna Carta’s dissemination. Four centuries before Magna Carta crossed the Atlantic, it had already been implanted across the Irish Sea. A version of the charter, issued in November 1216 in the name of the boy-king Henry III, was sent to Ireland, where it became fundamental to the English common law tradition in Ireland that survives to the present. This volume – the proceedings of a conference marking the 800th anniversary of the transmission of Magna Carta to Ireland – explores the paradoxes presented by the reception of Magna Carta into Irish law, above all the contested idea of ‘liberty’ that developed in Ireland. Contributors examine the legal, political and polemical uses to which Magna Carta was put from the thirteenth century onwards, as well as its twentieth- and twentieth-first century invocations as a living presence in contemporary Irish law. The volume also includes a new edition and translation of the Magna Carta Hibernie (‘The Great Charter of Ireland’) — an adaptation of the 1216 issue of Magna Carta found in the Red Book of the Irish Exchequer, which was destroyed in 1922.

Peter Crooks is a lecturer in medieval history at TCD, and a fellow of the Royal Historical Society. He is co-editor of The Geraldines and medieval Ireland: the making of a myth (Dublin, 2016). Thomas Mohr is a lecturer at the School of Law, UCD. He is honorary secretary of the Irish Legal History Society and the author of Guardian of the Treaty: the Privy Council appeal and Irish sovereignty (Dublin, 2016). 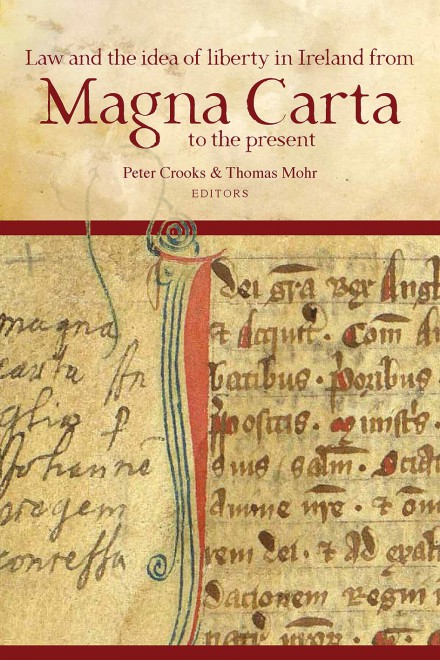