“Joseph Brady’s impressively thorough history of the capital from 1970 to 1990 ... it is stuffed full of granular detail about the capital’s changing landscape , environment, governance, housing, transport and consumer habits. James Joyce famously claimed that if Dublin were ever destroyed, you could rebuild it ‘brick by brick’ from his novel Ulysses – but in fact these hugely authoritative and beautifully illustrated publications are a much better bet. ”Andrew Lynch, The Sunday Business Post

“this engaging latest instalment in The Making of Dublin City series ... Brady approaches his analysis through the honed eyes of an urban geographer, with themes such as suburban expansion, city-centre decay, urban renewal, population and governance explored with the assistance of maps and contemporary photographs ... [He] excels in looking at the physical and social-planning effects of urban regeneration that followed legal changes in the 1980s allowing tax incentives to be given in certain districts to developers, investors and owner-occupiers.” Graham Hickey, The Sunday Times

“The most arresting image in this richly illustrated book is the first that readers will encounter: a map of Dublin, showing the locations of military barracks and governmental buildings, prepared by the Soviet Union’s army general staff in 1980 ‑ presumably in case the USSR felt the need to invade Ireland. Given what has happened in Ukraine, long after Joseph Brady’s volume went to press, this is rather chilling … Everyone seeking a deeper understanding of the city’s evolution needs to read this comprehensive account of how it coped with the challenges of urban change.” Frank McDonald, Dublin Review of Books, April 2022

"This eight volume in the Making of Dublin City Series is well illustrated, with telling 'before' and 'after' photos and truly useful maps and charts." History Ireland, May-June 2022

“Ruth McManus and Joseph Brady have been doing sterling work on the question of housing in Dublin for some time now. Their output is phenomenal ... Joseph Brady’s Dublin from 1970 to 1990 brings us almost up to the late twentieth century … The challenges facing the city in this period are covered here in a most comprehensive manner, taking in topics such as urban decay and renewal, the environment, governance, planning and transport ... This very readable and highly illustrated volume makes our daily experience of our city and suburbs a bit more comprehensible”. The Dublin Historical Record, Vol. 75. 2022 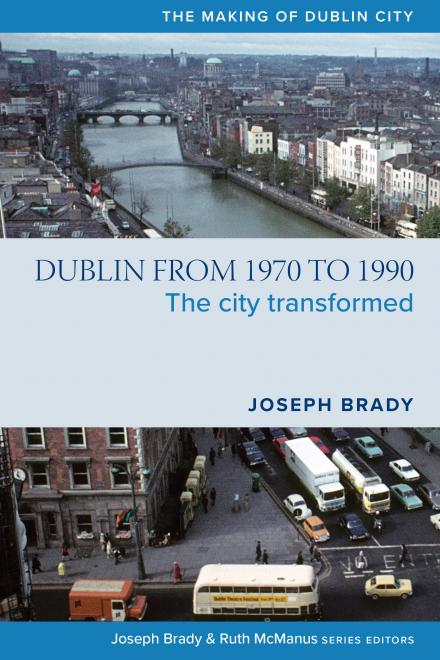