‘Within the field of Irish traditional music and song every so often a publication is brought into being with such care for its subject that it illuminates some aspect of our shared cultural heritage in a way never previously achieved. The Otherworld: music & song from Irish tradition is such an example. It offers a tantalizing insight into its subject, while simultaneously enticing the reader to explore the field further … This is an intensely rich, innovative, and fascinating representation of an aspect of Irish folklore which has, until now, remained relatively hidden within the archives of the National Folklore Collection / Cnuasach Bhéaloideas Éireann in University College Dublin … The presentation and layout of this publication is itself noteworthy in terms of the thoughtful and careful attention to detail … The Otherworld is infused with a sense not only of the supernatural, fantastic, and unusual, but perhaps as importantly, the sustained human endeavours over the years which were required to capture such vivid snapshots of a largely bygone age … Each turn of page brings another treasure drawn primarily from the National Folklore Collection … The Otherworld is an accessible, absorbing and beautifully presented publication which brings to life the hopes, fears, beliefs, and a sense of devilment of an Irish people, both rural and urban, and those collectors who through their passion and dedication have enriched our archives and our lives’, Thomas Johnston, Irish Literary Supplement (Spring 2015).


‘[The book is] a lavish and beautifully produced accompaniment to the two CDs that actually contain the recordings … This superb anthology is a triumph of design. The book itself is a magnificent production, lavishly illustrated with a range of often haunting black and white images that bolster its underlying purpose, and it is prefaced by a lively and lucid introduction …There is some great stuff to be heard in The Otherworld', History Ireland (July 2013).

‘The book boasts an endlessly informative text and many resonant photographs of singers, musicians, collectors and – most of all – landscape features … If there is another compilation like this one, I have never heard of it, and I doubt that it could be as stimulating as this one, a unique and (almost literally) haunting excursion into mystery and melody … [A] fantastic anthology and recording of fairy music', Jerome Clarke, Fortean Times (July 2013).

‘Ireland’s rich heritage incorporates an extraordinary depth of folklore and mythology, much of which focuses upon the spirit world, or, as the editors of this book term it, the “Otherworld” … The Otherworld becomes a large-format, double-disc collection with extensive liner notes, but its coverage is far greater than that suggests … The Otherworld provides a wealth of evocative photographs … the accompanying CDs provide a wealth of musical talent … Without any doubt, this is the most well-produced and utterly fascinating book on Irish music and song to have appeared in recent decades', Geoff Wallis, Songlines (June 2013).

‘A range of encounters with the supernatural is described in a collection of stories and songs from Irish folklore … The world of the fairies may seem like a long way from our world of skinny lattes and social media. But open the pages of the book The Otherworld, and listen to the two CDs that come with it, and you’ll find yourself carried off – as if by magic – to another realm … [an] enchanting selection of songs, tunes, black-and-white photographs and snippets of story … The musicians and storytellers describe a wide range of encounters with the supernatural, from the smile-inducing to the seriously spine-chilling … Each chapter of the book corresponds to a CD track. The text of the song or story is given, in Irish and English', Arminta Wallace, Irish Times (January 2013).

‘This book collects a considerable testimony from musicians of the otherworldly origin of some of the best-known tunes and songs in our heritage; what’s fascinating is how coherent the accounts are, how matter of fact are the attributions to "the little people", or to other sources not of "our" world, of so many powerful and haunting pieces of music … Sherlock and uí Ógáin here offer us meticulously-annotated examples of stories gathered by folklorists from the telling of musicians, backed up by two glorious CDs of the music', Theo Dorgan, Irish Examiner (February 2013).

‘In the magnificently engaging The Otherworld the interaction of music and the supernatural in Irish rural life gets full due and thrilling exposure … larger questions about the cause of supernatural experience aside the two discs, compiled from recordings made by the Irish Folklore Commission transcend simple ethnomusicological interest. These are sparkling performances that afford considerable pleasure and occasion delighted surprise … The book itself boasts an endlessly informative text and many resonant photographs of singers, musicians, collectors and – most of all – landscape features … If there is another compilation like this one, I have never heard of it, and I doubt that it could be as stimulating as this one, a unique and (almost literally) haunting excursion into mystery and melody', Jerome Clark, Rambles.net (May 2013).

'Accompanied by two CDs, the book is a fascinating study of how the supernatural impinges on Irish life', Frank McNally, Irish Times (Dec. 2012).

‘Just in time for your Christmas gift to the lover of Irish music and folklore, Four Courts Press in conjunction with Comhairle Bhéaloideas Éireann at UCD, have just landed The Otherworld – Music and Song from Irish Tradition, edited by Ríonach Uí Ógáin & Tom Sherlock … it is a truly wonderful social history narrative which draws the reader back to a period and place in Ireland that, arguably, no longer exists except in music and song … The songs, verses, and tunes all have real meaning to their custodians who value and honour their inheritance and cherish the memory of the very day when they first learned the piece and, especially, fro whom … The editors provide short biographical notes on contributors that, along with the social and cultural narrative, creates a wonderfully rich resource for the folklorist, cultural historian and local historian. The publication is beautifully illustrated with black and white photographs that capture the essence of this passage from “the Otherworld” of the past through modernity to “cultural curiosity”', Michael Merrigan, Ireland's Genealogical Gazette (December 2012). 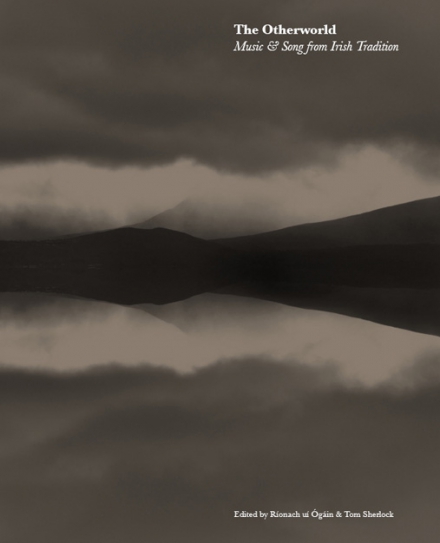