‘The author captures the sheer breadth and diversity of Irish experience by officers, priest, merchants, doctors, administrators, politicians, sailors, soldiers, beggars and whores between the Habsburg and Bourbon eras, and between two countries and two languages … [contains] an abundance of vivid material deftly extracted from various archives … an important contribution to the study of war and society and to the history of migration', Pádraig Lenihan, EHR (December 2012).

‘Óscar Recio Morales’ work on the various connections between Spain and Ireland between 1600 and 1825 is a good place for academic and general readers alike to learn of this intriguing and largely understudied relationship … Óscar Recio Morales’ book is the result of prodigious research in both Spanish and British archives. His style is both bright and accessible … Recio Morales has produced a monograph important for both hispanicists and scholars of northwestern Europe during the first glimmerings of the modern era', Donald J. Kagay, Sixteenth-Century Journal (Fall 2011).

‘The most impressive feature of Ireland and the Spanish Empire, 1600-1825 is that it is the first attempt to provide a complete account of the Irish experience in Spain over an extended time period … This is a significant book both for what it tells of the Irish experiences in imperial Spain over a period of two centuries … the most ambitious attempt to date at a full study of the Irish immigrant experience in any country in early modern Europe; it is comprehensive, thoroughly researched and conceptually aware; it set a high benchmark that others who pursue this subject must be encouraged to emulate’, James Kelly, Studia Hibernica (2009/10).

‘Óscar Recio Morales’s Ireland and the Spanish Empire opens with a broad-ranging historiographical chapter whose main aim, and virtue, is the robust affirmation that Spain, even at the height of its early seventeenth-century engagement with Ireland, at least tacitly accepted two fundamental realities: Ireland’s inclusion in the English sphere and the imperative of achieving and maintaining free trade … the author displays a staggeringly detailed knowledge of the vast archival base on which historians of the Irish in Spain can draw … Morales devotes considerable attention to the matter of Irish identity in Spain and its sphere, usefully describing the complex maneuvering required to milk their distinctiveness from other foreigners without exciting rejection by Spanish hosts … This is an important book, first because of its conceptual richness (especially in the first chapter) and also because of its archival wealth, its author’s evenhandedness, and his attention to detail … the translation is lucid and accessible and the Irish Department of Foreign Affairs, sponsors of the English-language version, can congratulate itself on a well spent grant-in-aid', Thomas O’Connor, NUI Maynooth, H-Net reviews (September 2010).

‘This is a worthwhile addition to books already published on this subject. It broadens out discussion of Hiberno-Spanish relations by bringing in the Spanish empire and throws new light on this aspect of the Irish diaspora in the early modern world', Books Ireland (May 2010).

'The pathway to this rediscovery of the Irish Diaspora within the Spanish world has certainly been mapped by Morales as he clearly throws down the gauntlet to others to continue this fascinating exploration of Ireland and the Spanish Empire … works like this by Morales [are] simply invaluable', Michael Merrigan, Ireland’s Genealogical Gazette (May 2010).

‘An example of the “new history” of the Irish in continental Europe, this broadly conceived and fascinating study focuses on the Irish in Spain (much more than the empire) from 1600 to 1825. Morales (Univ. Complutense Madrid, Spain) provides chapters on the mythical and factual background of Spanish-Irish contacts; Philip III and Ireland after the arrival of numerous Irish exiles in Spain beginning in 1602; Irish expectations and Spain’s inability to respond to them, 1621-90; the Irish community in Spain, 1691-1754; and Irish successes in Spanish politics, trade, and the military from 1754 to colonial independence in 1825. Throughout the centuries covered, the Irish community in Spain emphasized its military and other service to the Spanish monarch, climed descent from peninsular Spaniards, and unquestioned Catholicism. Based on an extensive array of archival materials, two major electronic databases, and relevant secondary literature, this work reveals a little-known chapter of Spanish social and political history. It illuminates Irish migration to Spain, Spain’s generally supportive response to the immigrants, and the immigrants’ ability to adapt and prosper. All college and university libraries should purchase this outstanding volume … essential', M.A. Burkholder, Choice (September 2010).

‘Among his topics are the new history on Irish migration to Spain, success and failure of the Irish political strategy at the court of Philip III of Spain, the Madrid-Kilkenny axis in 1641, Ireland in 18th-century Spanish foreign policy, and the Irish in the Spanish colonies', Reference & Research Book News (August 2010).

‘In Ireland and the Spanish Empire, Óscar Recio Morales assumes the challenge of offering a complex synthesis of Irish-Spanish relationships at the peak of their evolution … As Professor Ciaran Brady of the Department of History in Trinity College, Dublin, notes in his brief preface to this monograph, “this book is at once a symptom of, and a substantial contribution to, a major revolution in the study of early modern Irish history in the last decade”. Both within Ireland and Spain, the analysis of Irish-Spanish relationships has entailed a revolution in the interpretation of this period. It allows Irish scholars to transcend the traditional framework of Anglo-Irish relations as an exclusive interpretative model of the history of Ireland', Diego Téllez Alarcia, Irish Historical Studies (2011). 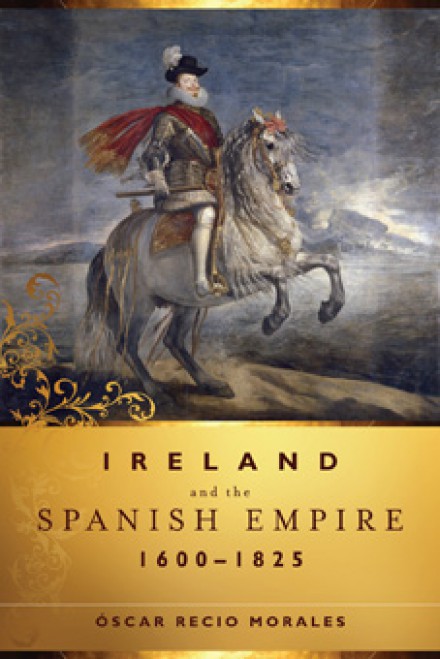