This book traces the economic, social and cultural history of Ireland from the 1870s to 1914, when the prospect of partition moved from being almost unthinkable to being almost inevitable. Ulster Protestants organized themselves in implacable opposition to the measure. After the defeat of the first Home Rule Bill in 1886, the essential approach of the Conservative Party during their 20 years of government was a policy of ‘killing Home Rule by kindness’. Parnell’s death in 1891 and the defeat of the second Home Rule Bill marked the end, for the time being, of militant nationalism. Essays and a document-based case study provide an account of the various self-government plans, place them in context and examine the government’s motives for putting the schemes forward. The Home Rule crisis also helped bring about an intensification of Irish nationalism which identified itself with Catholicism and Gaelic (native Irish) culture. This is further explored in the case study on the Gaelic Athletic Association. A third case study explores the Dublin lockout (1913), the decline of Dublin as the ‘second city’ of the empire and the development of a politically conscious Irish labour movement under figures like James Connolly and James Larkin.


This book is part of the Four Courts History of Ireland Series, edited by Donnchadh Ó Corráin & Tomás O’Riordan. This series offers a fresh approach to Irish history since the Act of Union (1801). In place of a general narrative, each book focuses on major aspects of Irish history. Three short survey essays at the beginning of each book – on politics and administration, society and economy, and culture and religion – place these themes in their broader context. Two chapters are devoted to each major theme: the first is an analytical historical essay; the second is a broad selection of original historical documents, each with an introduction, an exact citation of source, and a concise presentation of its paraphrasable content. Lastly, there are short essays on historical concepts important in the period and brief biographies of major figures (each with a select bibliography). These books answer to the needs of university students, the general reader, and all those interested in Irish history. 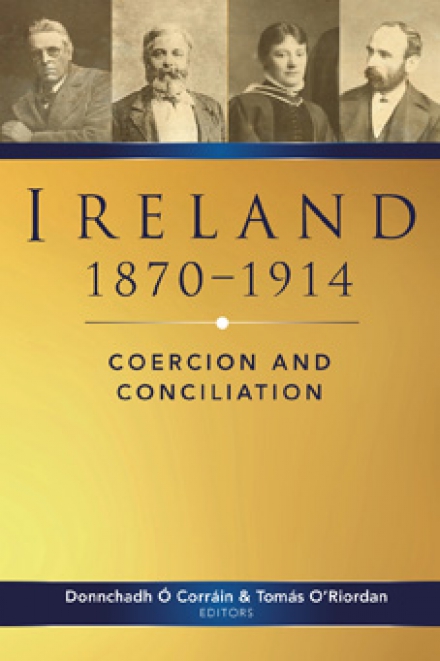