This book opens by exploring how nationalist Ireland mobilized a mass democratic movement under O’Connell to secure Catholic Emancipation. This world was soon to be transformed by the horrifying tragedy of the Great Famine of 1846–50, which set the context for the emergence of a popular mass nationalism, expressed in the Fenians (and later by Parnell and Sinn Féin). This period also witnessed the radical re-organization and politicization of the Catholic Church that began with the Synod of Thurles (1850). All three events, in varying ways, changed the face of nineteenth-century Ireland. This book also examines how at the same time, the Protestant north-east of Ulster was enjoying the first benefits of the Industrial Revolution. Although post-Famine Ireland modernized rapidly, only the north-east had a modern economy. The rich document-based case studies on Emancipation, Famine and the Synod are supplemented by thematic essays on politics and administration, society and economy, and culture and religion in this period.

This book is part of the Four Courts History of Ireland Series, edited by Donnchadh Ó Corráin & Tomás O’Riordan. This series offers a fresh approach to Irish history since the Act of Union (1801). In place of a general narrative, each book focuses on major aspects of Irish history. Three short survey essays at the beginning of each book – on politics and administration, society and economy, and culture and religion – place these themes in their broader context. Two chapters are devoted to each major theme: the first is an analytical historical essay; the second is a broad selection of original historical documents, each with an introduction, an exact citation of source, and a concise presentation of its paraphrasable content. Lastly, there are short essays on historical concepts important in the period and brief biographies of major figures (each with a select bibliography). These books answer to the needs of university students, the general reader, and all those interested in Irish history. 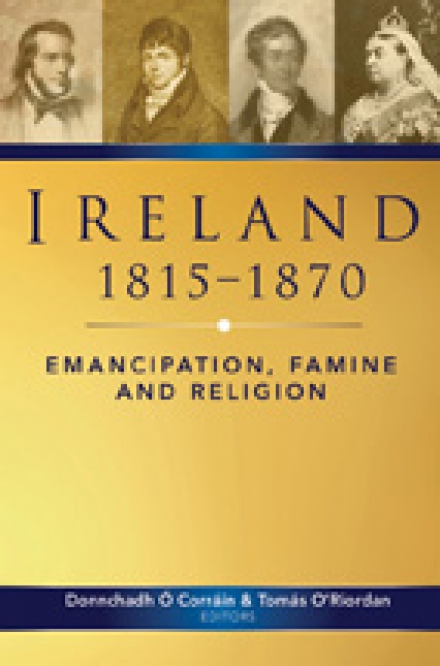