The Festival of Lughnasa

Garland Sunday and Domhnach Chrom Dubh are two of the many names of a festival celebrated by Irish country people at the end of July or the beginning of August. It marked the end of summer and the beginning of the harvest season, and on that day the first meal of the year’s new food crop was eaten. The chief custom was the resorting of the rural communities to certain heights or water-sides to spend the day in festivity, sports and bilberry-picking. The custom existed also in the Isle of Man, Cornwall, Wales and in the north of England. Formerly it must have been general in all Celtic lands for there is no doubt that it is a survival of Lughnasa (Lugnasad), the Celtic festival held on the first of August.

In the description of the celebration much emerges of the old life of the countryside, and so the study is, in part, a contribution to social history. Moreover, as the people preserved legends of the origin of the festival and of the assembly-sites, it has been possible to show a correspondence with ancient mythology, as expressed in Irish literature and in the cult-figures of Roman Gaul. The dominant myth of the festival is brought to light.

A panorama, both extensive and detailed, is unfolded in the study, which reveals, inter alia, the nature of Crom Dubh, shows that legends of Cú Chulainn, Saint Patrick, and Cornwall’s Jack the Tinkard originate in tales of Lugh, suggests why Jephthah’s daughter was connected with the festival in the Isle of Man, glances at the medieval cult of Saint James, and interprets anew the battle of Moytura and the Étain saga. It shows a relationship between the old assembly of Tailtiu an the Croagh Patrick pilgrimage. It discusses Puck Fair. It ranges from Lugudunum in first-century Gaul to Dún Lughaidh at the foot of Errigal. Figures from Irish mythology, hagiography and history throng its pages.

Máire MacNeill (1904–1987) studied at University College Dublin, and was a graduate of the National University of Ireland. From 1935 to 1949 she was a member of staff of the Irish Folklore Commission. She was a co-editor and translator of Sí-Scéalta ó Thír Chonaill / Fair legends from Donegal in the Comhairle Bhéadoideas Éireann series Scríbinní Béaloidis / Folklore Studies and the translator of Séamus Ó Duilearga’s Leabhar Sheáin í Chonaill – Seán O Conaill’s Book in the same series. 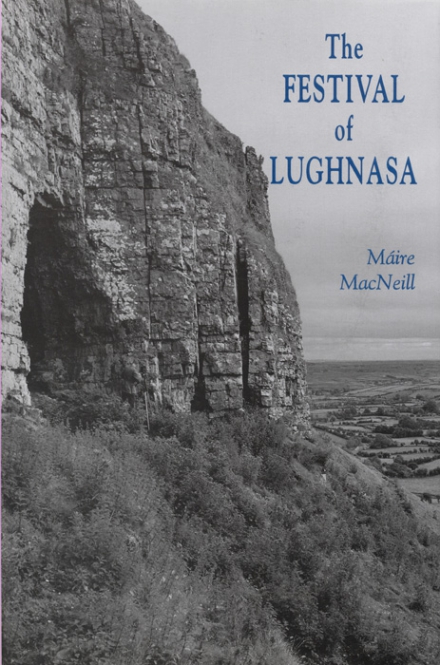