Descriptive catalogue of the Mediaeval and Renaissance Latin manuscripts

‘[T]he plates show that many of these manuscripts were works of art and can be appreciated as such’, Books Ireland (Summer 2008).

‘[T]he manuscripts are of items in almost daily use: prayer books, Psalters, Books of Hours, account books, histories and chronicles. Though most are aids to piety, science and history as well as the classics are not forgotten. What they all reveal is how medieval religion was integrated into life’s ordinary round. The new catalogue has been prepared by Marvin L. Colker ... who has devoted some fifty summers to these Dublin treasures’, Peter Costello, The Irish Catholic (June 2008).

‘It is with great delight that we welcome the first supplement to Prof. Colker’s Trinity College Library Dublin: Descriptive Catalogue of the Mediaeval and Renaissance Latin Manuscripts ... The bibliographical lists provide a valuable resource to the literature concerned with the Trinity Latin manuscripts. Prof. Colker has also included a provenance index to the collection which provides a fascinating insight into the history of manuscripts…[I]t is the reviewer’s hope that this essential catalogue of Mediaeval and Renaissance manuscripts does not go out of print as did his 1991 work!’, Ken Bergin, An Leabharlann: The Irish Library (June 2008).

‘At the launch of his Descriptive Catalogue of the Mediaeval and Renaissance Latin Manuscripts in the Library of Trinity College Dublin in 1991, the author, Professor Marvin L Colker, announced his intention of beginning work immediately on a volume of additions and corrections to the catalogue. This is it, but much more, for this volume – while including the promised additions and corrections to the 1991 catalogue – also provides descriptions of the medieval and renaissance Latin manuscripts acquired by Trinity between 1990 and 2003…whatever the reasons for these acquisitions, one can only be grateful that they have been acquired by a publically-funded repository, that they are freely available to the academic community and that they have been so expertly catalogued’, Dr Raymond Refaussé, Irish Archives (Winter 2008).

‘Marvin Colker’s catalogue of the manuscripts of Trinity College Library, Dublin, appeared in 1991. This supplement contains descriptions of thirty-three newly acquired items from the ninth to the sixteenth century as well as addenda and corrigenda to the 1991 catalogue. Most of the new items have been purchased in the auction room, and they represent a wide range of provenances, including manuscripts from Ireland, England, France, Germany and Italy. It is pleasing to see a university library continuing to build up its collections at a time when manuscripts have become exorbitantly expensive and funds scarce … we can be very grateful to the cataloguer for making this important addition to the work he published all of seventeen years ago', N.F.P., Medium Ævum (2008).

‘In 1991 Marvin Colker published his two volume Descriptive Catalogue of the Medieval and Renaissance Latin Manuscripts of Trinity College Dublin which quickly became a standard reference tool for researchers. This present work is the first supplement to the 1991 catalogue and is in two parts. Part I offers descriptions of manuscripts acquired by Trinity College Library between 1990 and 2003, while Part II presents corrigenda and addenda, especially bibliographical, to the 1991 catalogue .. A major incentive to buy this volume is its collection of thirty-two high quality colour plates which illustrate a representative selection of the manuscripts described in the catalogue. These include a beautiful sixteenth century Germanic/Netherlandish Madonna and Child, as well as several amusing drawings from the margins of a fourteenth century copy of the letters of Seneca the Younger. There are also various well-chosen examples of marginalia, coded sidenotes, musical notation and notarial signs', Margaret Murphy, Eolas (2009). 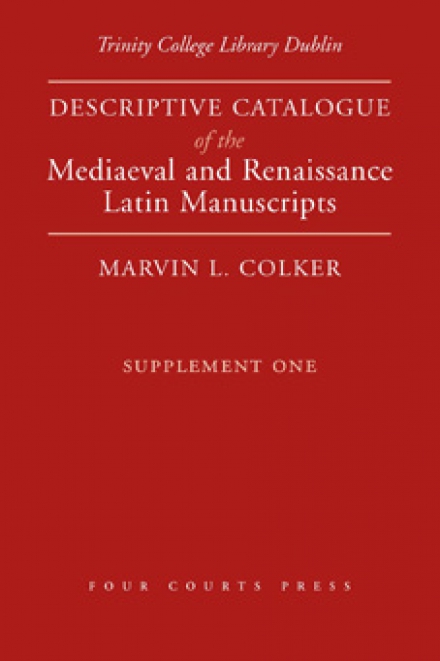