‘Woods has … remain[ed] steadfast to his objective of producing a worthwhile research aid above all else and this is where he makes an impact. He has raised the bar significantly, listing, distilling, and occasionally quoting from, the writings of no less than 209 authors, ranging over four centuries from Sir William Brereton (1635) to S.P.B. Mais (1948). But his opus is no mere anthology. Woods goes much further by constructing a “ready-recoker” type system of presentation that is sure to spare future researchers much time, toil and drudgery … he manages to both catalogue and present a structured summary of the work of individual travel writers under the headings: purpose, dates, itinerary, mode, content and persons. The effectiveness of this scheme and its usefulness to the local historian cannot be understated … Woods has doggedly pursued his mission of facilitating others to extract their particular insights from these old travellers’ accounts and in this he has achieve a substantial measure of success. Researchers from now on will have a lot to thank him for', Ned McHugh, County Louth Archaeological and Historical Journal (Spring 2011).

‘Woods presents his travel accounts in chronological order, making them especially useful for historians. Those involved in Travel Studies will certainly be interested in this book … The “Itineraries” constitute one of the most important and useful parts of the compilation. They consist of listing of places mentioned in the text, including well-known tourist sites, as well as towns and villages, in the order in which the traveler encountered them’, William H.A. Williams, Irish Literary Supplement (Spring 2015).

‘An absolute gem for the local historian and genealogist … this volume is of immense importance to the study of Irish local and social history … this must be the foremost values of this source-material for the historian – an actual eye-witness account of the life and times of place, people and country … this volume brings these under-utilised resources to a much wider research community and in doing so we can, no doubt, expect that these wonderful accounts will receive the attention that they rightly deserve', Michael Merrigan, Ireland’s Genealogical Gazette.

‘Long before Bord Fáilte began promoting Ireland for holidays many travellers came to Ireland for various reasons and left accounts of their time here. Published as one of the Maynooth Research Guides for Irish Local History, this looks at the writings of over two hundred travellers in Ireland from the 17th to the 20th century and considers how useful these records are as a source for local historians … a useful and convenient guide both to the local and general historian', Books Ireland (February 2010).

'There is nothing to rival a well written contemporary travellers’ account … In his Travellers’ Accounts C.J. Woods has provided us with a wide ranging annotated bibliography covering no less than 209 of these accounts … Before the publishing of this book one of the main problems for researchers when wishing to use travellers’ accounts was their accessibility … Woods’ book addresses many of the problems by aiding the historian in evaluating the relevance of accounts to their own researches. In addition to a chronology of each journey he also provides us with a detailed itinerary, mode of transport, persons encountered, subjects covered and even the purpose of the journey where known (‘to overcome disappointment of a rejected novel’ is one of the more memorable). Thus through Woods’ endeavours we can seek for information on the economy, typography, diet, recreations, politics, natural history, dress, music, health, antiquities and even the weather. In addition to this marvellous index to the literature Woods also adds his gift for picking out a particular phrase or description from many of the accounts which gives a flavour of the writer’s style and whets the reader’s appetite for more … His thirty-page introduction provides one of the best arguments for why such accounts are of prime importance to the researcher and the snippets he has selected from each account provide a wonderful introduction to the complete text. This is perhaps the most useful and enjoyable tool for the historian to be published in the last twelve months', Roger Dixon, Familia: Ulster genealogical review (2010).

‘[C.J. Woods] highlights the importance of ‘travellers’ tales’ to historians in their attempts to set the past in context. [He] illustrates the wealth of such material and … provides a pen-picture on each of the travellers listed. He indicates the purpose and period of his or her travel, the exact itinerary followed and his or her mode of transport. Most importantly he notes the travellers’ observations and the persons encountered … this book, the fruit of a life-time of scholarship, is a thesaurus of historical information and will be welcomed as an indispensable aid for historian and local historian alike', J. Anthony Gaughan, Irish Catholic (6 May 2010).

‘Woods spent many years collecting mainly printed accounts of Ireland made by travellers. In this encyclopedia of his findings, he lists 209 of these accounts in chronological order … Woods intends this to be a reference for historians but it will also be fascinating to those searching for their Irish heritage who want to discover firsthand accounts of the places where their ancestors lived', Reference & Research Book News (May 2010).

‘Modestly billed as an “aid”, this book is in fact an innovative database, with each journey minutely annotated according to a purposeful methodology … we are provided with far more than a standard bibliography, learning the dates, itinerary and mode of conveyance, followed by the content of the account (and if illustrated), and where persons of note were encountered or seen. An index of travellers and places is also provided, allowing for ample cross-referencing … This is an inspirational research guide, which must challenge scholars here and abroad to dig further, encourage theses and launch a wide range of projects, as there is literally something for everyone in the audience … Historians of religion will not be left wanting, nor those of institutions visited (prisons, police stations, hospitals, workhouses, colleges, schools, libraries, societies), not to mention archaeologists, botanists, zoologists and military historians, and those seeking insights on specific political phenomena, from anti-tithe agitation to unbridled bigotry. Art historians can busy themselves collating the visual material listed, if only to broaden the resources that publishers have to illustrate future books on Ireland … this book is excellent value for money … presented as an “elaborate index”, it makes for compelling and reassuring reading', Sylvie Kleinman, History Ireland (May/June 2010).

‘This useful book is intended as an aid to historians and geographers: a guidebook to travellers’ accounts of the past – that other foreign country, as L.P. Harley indentified it in The Go-Between … The author identifies the importance of the accounts as eyewitness primary sources, usually published at or near the place and time to which they refer … well over two hundred accounts for the period 1635–1950 are listed, discussed and annotated … This publication provides a wealth of critical information on a significant primary sources … the compilation and publication of this rich mine of material is of great value and complements existing publications in this well established series', Brenda Collins, Family & Community History (November 2010).

‘This volume provides a listing of the most informative published narratives prepared over three centuries. It is a significant achievement from which even those well versed in the history of Irish travel writing will profit, but it is still more useful because it is accompanied in each instance by an invaluable summary of the itinerary undertaken, the themes and subjects engaged with, and the main persons encountered. Accessing Irish travel writing has never been easier … Dr Woods has cast his net widely', James Kelly, Irish Literary Supplement (Spring 2011).

‘CJ Woods, in this valuable volume, culls his large, authoritative and as-yet-unpublished bibliography of Irish travel narratives for a selection of 209 accounts. They encompass tours taken from 1635 to 1948. For each narrative, Woods provides a wealth of bibliographic detail in illuminating and systematic annotations. In the structure and breadth of his annotations, Woods has developed a fine resource for the Irish historian … Woods has undertaken a very important scholarly enterprise. This reviewer commends Woods’s volume to students of Irish travel, and to researchers of local history for whom this bibliography will serve as a guide to travelogues rich in detail and local “colour”', Kevin J. James, Irish Historical Studies (2010). 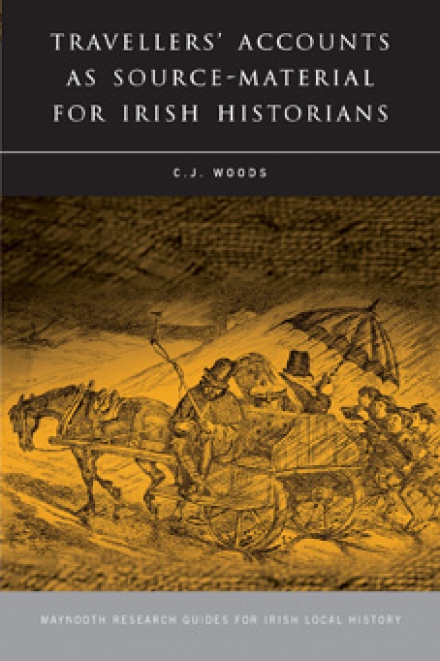