The Orange Order in Canada

‘The papers included in this collection offer an insightful look into what was at one time a very popular and very controversial group’, Book News (May 2008).

‘We all know the Orange Order has lodges beyond Ireland, Liverpool and Scotland ... Canada – and Newfoundland – were places where there were once huge memberships and where the Order wielded considerable political power. This succinctly titled volume is a scholarly contribution to that story and its nine essays are ably edited by David A. Wilson’, Rory Brennan, Books Ireland (October 2008).

'This collection is a valuable contribution to the history of the Orange Order in Canada, but its broader themes of identity and ethnicity will be stimulating reading for those studying these issues in other parts of the Irish diaspora. As such, this book will be of interest not only to scholars of Canadian history but to those engaged in ethnic, Irish and diaspora studies as well', Carolyn Lambert, History Ireland (May/June 2009).

'[A] valuable collection of essays … this volume ranges widely in subject matter, from the function of the Order in Victorian Toronto to its precipitous decline in the late twentieth century, indicating much potential for future research in a vibrant and still emerging field of study … [the book] indicates the healthy nature of research on the Orange Order and the evolution of an Orange historiography that more accurately reflects the complex nature of an organisation that was a key part of political and associational culture in both Ireland and the British world', D.A.J. MacPherson, Irish Economic and Social History (2011).

This superb study, the first to make extensive use of lodge records, demolished the convenient fiction that Canadian Orangeism was a malignant Ulster import, primarily devoted to re-enacting homeland squabbles in the New World. In fact, Orange ideology and organisation turned out to be highly adaptable, catering for a wide range of social, economic, religious, and political aspirations shaped by local conditions', David Fitzpatrick, Ulster Genealogical Review (Winter 2008). 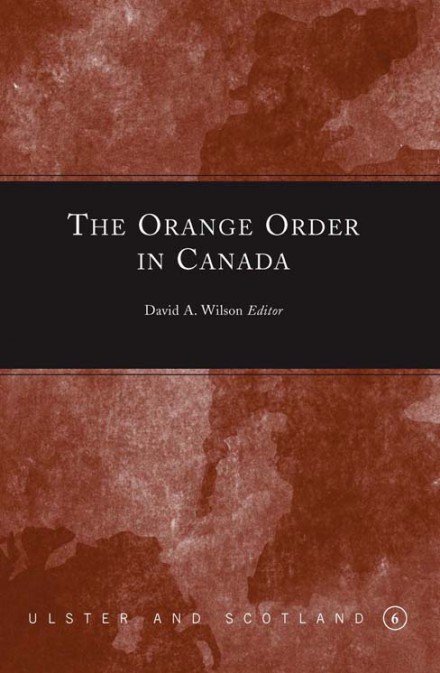