'This is an invaluable volume for art historians, archivists and social historians alike, and has ramifications for the study of manuscripts throughout the British Isles, rather than Ireland alone', Julian Harrison, Rare Books Newsletter.

‘There can be no doubt that this volume sheds valuable additional light on the history of the clergy and citizens of medieval Dublin. Once again we owe a debt of gratitude to the organisers of the Christ Church project', Katharine Simms, Search.

‘This is an extremely important and welcome book which raises the study of late medieval Irish manuscripts to a new level’, Brendan Smith, Irish Archives.

‘This volume is not so much a catalogue of the medieval manuscripts of Christ Church Cathedral, Dublin as it is a collection of six articles about individual manuscripts or collections of documents among the medieval holdings of the cathedral. It is handsomely produced, with four colored plates and twenty-seven black-and-white illustrations; that is, more than one in eight pages gives a visual image to illustrate the description of the manuscripts … this is an excellent collection of essays describing the medieval holdings of Christ Church Cathedral, Dublin; it is a desideratum for the bookshelves of those who study medieval manuscripts and a must-have for those interested in the history of the Irish Church or those with any link to Christ Church', Linne R. Mooney, Journal of the Early Book Society (2007).

‘Ireland, even more perhaps than Wales, has cause to lament the loss of its medieval libraries. Ker’s Medieval Libraries of Great Britain, with its Supplement, provides a handy guide to the bleak Welsh scene and the few survivors. Given the lack of such a guide for Ireland, a volume devoted to the surviving books (and to the surviving evidence for the archives, destroyed in 1922) of Christ Church, the best surviving group for any Irish cathedral, is all the more welcome’, Daniel Huws, Cambrian Medieval Celtic Studies (August 2008).

‘Although there exists a valuable and unique collection of medieval manuscripts associated with Christ Church cathedral, it has not until recently received the critical attention it deserves ... This book ... seeks in particular to place them in the context of everyday workings of the cathedral priory from the 1170s onwards, and that institution’s place within the broader social and intellectual life of Dublin and beyond … This is a stimulating collection of essays by scholars expert in their knowledge of the manuscripts themselves and the context in which they were produced and developed. The essays are supplemented by attractive and useful reproductions from the manuscripts under discussion’, Michael Staunton, Studia Hibernica (October 2008).

‘The origin of this book lies in a poignant event that took place in 2004, when the surviving medieval manuscripts of Christ Church Cathedral, Dublin were reassembled for the first time in almost half a millennium in an exhibition in their original home’, Seán Duffy, Catholic Historical Review (April 2009).

‘Ray Refaussé in his preface to the volume writes: “In the popular mind at least there is an assumption that few manuscripts survive from medieval Ireland”. The publication of this volume challenges that assumption by providing wider public access to the Christ Church Cathedral manuscripts and by revealing their wealth and beauty’, Susan M. Parkes, Recusant History (May 2009). 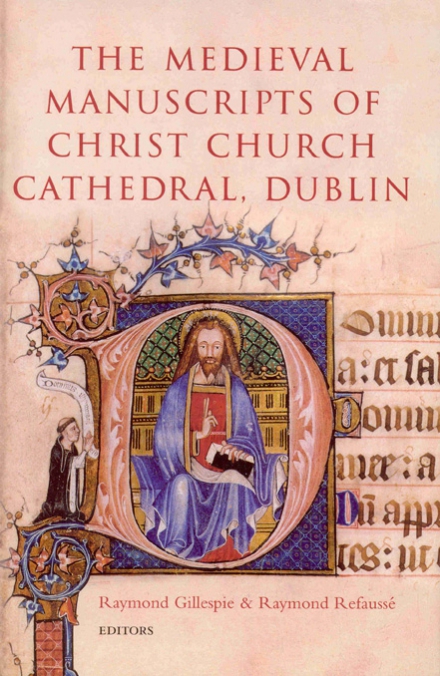