Four stresses, a line broken in two by a caesura, and a pattern of alliteration linking the two half-lines were features of the staple manner of Anglo-Saxon verse. And this tradition of writing continued into post-Conquest England, sometimes providing a distinctive alternative to rhymed or stanzaic verse, sometimes coexisting with it, occasionally a little uneasily.

‘But trusteth wel, I am a Southren man; I kan nat geeste 'rum, ram, ruf', by lettre ...’ says Chaucer’s Parson, parodying the manner of alliterative verse and hinting at its provinciality. Much of it was, in fact, written in the west and north of England. The late efflorescence of alliterative writing in fourteenth-century and early fifteenth-century England is remarkable for its range and quality, and this is the focus of this collection of essays, five of which have not been published before.

There are four essays on some of the lyrics preserved in London, British Library MS Harley 2253, two on Winner and Waster and The Parlement of the Thre Ages, both of which are preserved in London, British Library MS Additional 31042, and two on poems from London, British Library MS Cotton Nero A. x – one on Sir Gawain and the Green Knight and contemporary knighthood, and one on Patience and the question of obedience to authority. One essay focuses on an incident in Piers Plowman dealing with the lawlessness of the gentry. Another looks at Pierce the Ploughman’s Crede and Lollard attitudes to written texts. And another considers the clerical agenda of St Erkenwald and the writing of history. Two related texts – Richard the Redeles and Mum and the Sothsegger – are analysed, along with Gower’s Cronica Tripartita, as verdicts on the reign of Richard II and as expressions of the determination of poets to comment on political affairs in contexts which sought to silence them. Finally, what may have been the last great English alliterative poem, Scotish Ffeilde, is considered in relation to other contemporary poems on the Battle of Flodden of 1513.

John Scattergood lectures in medieval English at Trinity College, Dublin. He is the author of Reading the Past: essays on Medieval literature and society and is co-editor of Texts and their contexts: papers from the Early Book Society and Text and gloss: studies in Insular language and literature. His latest book, Manuscripts and ghosts: essays on the transmission of medieval and early renaissance literature, was published by Four Courts Press in 2006, and a festschrift in his honour – Late medieval and early Renaissance texts in honour of John Scattergood – was published in 2005. 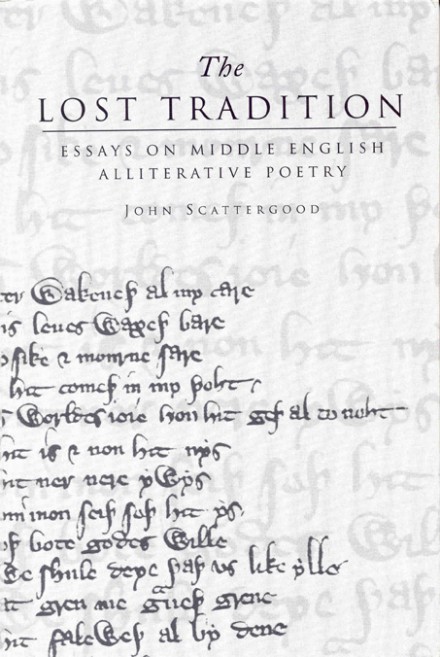