‘…the book is a valuable contribution to an understanding of the newspaper. The author traces the newspaper’s political orientation from its foundation in 1859…[and] gives an excellent description of The Irish Times during the Second World War […] There is much valuable information, which will give the discerning reader pause for thought. For readers interested in the subject of the Irish Times this book is highly recommended', John Martin, Irish Political Review (Spring 2009).

‘Today, the Irish Times is one of Ireland’s most authoritative journals – the newspaper of record for political and intellectual elites from Mayo to Monkstown. Mark O’Brien provides a detailed and colourful account of this transformation. His history of the Irish Times is also the story of modern Ireland: it tracks the newspaper’s sceptical response to the emergence of the Free State in 1922 and the declaration of the Republic in 1949; it also examines its fractious relationship with the nation’s governments and political figureheads from Eamon de Valera (whom the paper repeatedly compared to Hitler) to Bertie Ahern’, David Dwan, TLS (April 2009).

'The history of any newspaper is effectively the history of life as it is reported in the pages of that newspaper. Mark O’Brien traces the highs and lows of the Irish Times’ 150-year existence through the many significant milestones in its history, including the political turmoil of the early 1920s, the isolation of the Emergency years through to the evolution of modern Ireland in the latter part of the twentieth century […] Perhaps the most interesting aspect of Mark O’Brien’s thorough and hugely informative account of the Irish Times’ history are the chapters that are devoted to the early years […] Mark O’Brien deserves immense credit for producing a book that must have required exhaustive research. Not only has he delved deep into the newspaper’s archives, but he has also combined memoirs, personal papers, company records and a whole variety of other historical sources to produce what is unquestionably the definitive history of the Irish Times’, The Western People (February 2009)

‘As the preface to this volume makes clear, the Irish Times originated as the voice of southern unionism, but, to use a catch-phrase of its own, it has to keep up with the changing times! … By degrees, the paper shed much of the conservatism of its founders and came to espouse the ‘liberal ethic’ at a time when it was neither popular nor particularly profitable to do so in Ireland, and in its pages issues were debated that would eventually find a popular audience through radio and television, but at a much later date. It may have had little choice but to come to terms with independent Ireland, but it did so very much in its own way, frequently providing a critique of Irish society born of a commitment to national ideals’, Kenneth Milne, Church of Ireland Gazette (December 2008).

‘The history of a newspaper is not merely the history of the institution itself. Rather it is a political and cultural environment of its age. In the case of the Irish Times it is a story of how a product survived and frequently prospered despite the decline of its original raison d’être ... This book is both a history of the Irish Times and a history of the country in which it was published … [O]ut of a huge mass of available material the author has put together an eminently enjoyable and readable tome which traces the evolution of one of the county’s most notable institutions to the position of influence it enjoys today’, Ronan O’Brien, Irish Literary Supplement (Spring 2009).

'O’Brien’s meticulous history of an Irish Times morphing from a provincial Protestant paper into a powerful national news machine shines in its coverage of the late twentieth-century boom times that revitalized Ireland', Mary McWay Seaman, The Celtic Connection (May 2009).

‘O’Brien tells the storey of the Irish Times, from its founding in 1859 as the voice of the southern unionism movement to its current status as the country’s respected newspaper of choice. The author describes many of the paper’s more controversial topics and stories and its sometimes idiosyncratic editors. Research for the book was based on personal papers, memoirs, archives, and the newspaper’s journalism’, Book News (May 2009).

‘The Irish Times has survived many treacherous times before and on one occasion nearly went under, as O’Brien clearly demonstrates. Somehow the paper has managed to survive, helped by a reader loyalty that isn’t matched by any other national newspaper in Ireland, and by an amazing loyalty from its staff too. Mark O’Brien does a very useful canter through the whole corporate history of the paper. He is good and thorough on its mechanics as a business, with plenty on the proprietors and the profits and losses’, Hugh Oram, Books Ireland (March 2009).

‘O’Brien’s interviews and use of non-Irish Times material provide interesting and not uncritical insights into the business side of the paper … a useful work of reference that will be of interest to those who want to learn more about the history of the Irish media', Robert McNamara, Irish Historical Studies (Nov. 2009). 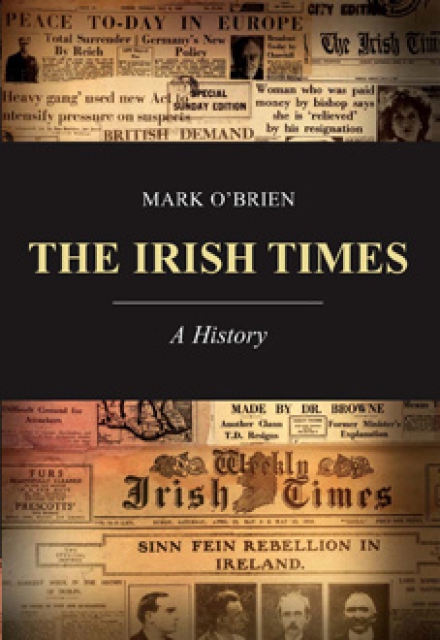