Representations in Shakespeare and Renaissance drama

This book is a comprehensive study of the representation of Ireland in the plays of Shakespeare and his contemporaries. Through a detailed analysis of a range of canonical and less familiar plays, such as The Misfortunes of Arthur, Captain Thomas Stukeley, Sir John Oldcastle and Dekker's The Honest Whore, this book reveals fascinating interconnections between Ireland as it was figured in Elizabethan and early Jacobean drama, and contemporaneous political and cultural anxieties about Ireland and Irish alterity. Exploring how the stage provided a fluid, though licensed, space where such anxieties were negotiated and confronted, this study questions views of the stage Irishman as a static colonialist stereotype. Instead, it demonstrates that dramatic representations of Ireland were dynamic, heterogeneous, and ideologically unstable.

Opening up Renaissance drama to its multivalent Irish contexts, Staging Ireland will appeal to scholars and students of Shakespeare and early modern literature; drama and theatre as well as Irish studies.

Stephen O'Neill is a lecturer in the department of English, NUIM, with research interests in Shakespeare and early modern studies. 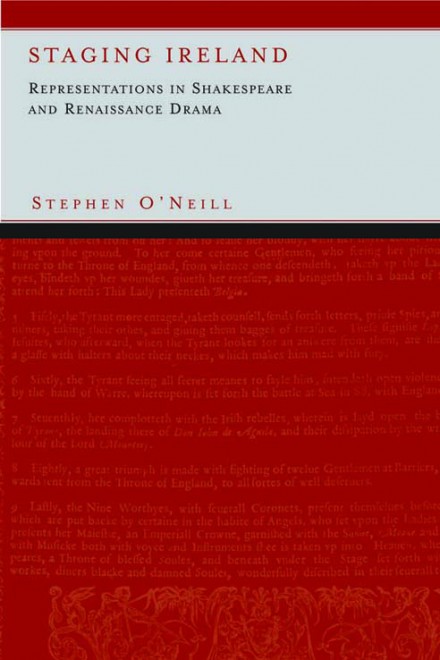