Castletown, near Celbridge in Co. Kildare, was the home of the Right Honourable Thomas Conolly and his wife Lady Louisa Augusta (née Lennox). As a well-connected, high-society couple, the Conollys received invitations to the most exclusive social events in Dublin and London and were closely associated with formal social life at Dublin Castle. By the 1780s, their magnificent residence was a centre of fashionable sociability in which music and dancing were significant agents. This study outlines the types of music and dancing which occurred at Castletown in the period from 1759 to 1821. It points to the influences of the Conolly’s social milieu and the entertainments which they experienced at non-domiciliary venues such as assembly rooms and theatres. It also shows how music and dancing functioned in terms of social education: prominent music- and dancing-masters were employed and musical instruments purchased for members of the extended Conolly family. This scholarly examination of music and dancing, as aspects of domiciliary sociability, entertainment and education, provides new perspectives on the form, function and furnishing of a Georgian country house in Ireland. It also provides a useful framework for investigating the lives of the various people who lived and worked therein.

Dr Karol Mullaney-Dignam is currently an IRCHSS Government of Ireland Postdoctoral Fellow at the National University of Ireland Maynooth where she is conducting her ‘Music in the Irish country house’ research project under the auspices of the Departments of History and Music. 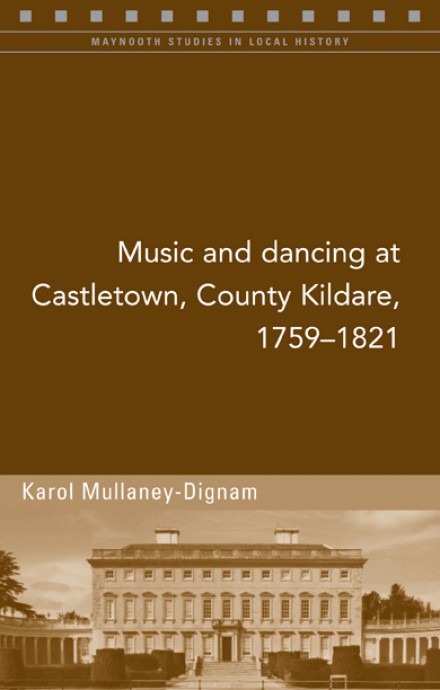