'A good picture of the workings of the criminal justice system. It is a monumental achievement, and is an invaluable resource for all historians of criminal justice', Lindsay Farmer, The Edinburgh Law Review (January 2012).

‘Dr. Vaughan has an astonishing wealth of impeccably sourced detail … the exquisite, almost balletic procedure of the courts and their officers is described, the Crown’s case against the prisoner is analysed and the prisoner’s defense is discussed. For practical purposes it is a legal text book, but Vaughan’s literary flow makes the ghoulish as palatable as the strategies employed at Kursk … there is little which has escaped Vaughan’s pen', N. Furlong, Wexford Echo (November 2009).

‘[Vaughan] is a writer of unobtrusive elegance and sharp observation. There is no definitive study of the legal system in Ireland in the nineteenth century and Vaughan tells us he picked murder because it shows the whole judicial process under its greatest strain … there is no doubt that this study ranges far beyond pure legal history and will be of use to the general historian as well as the specialist in criminology, social psychology, penology and such related disciplines. I am sure the late John Fowles, in spite of his aversion to footnotes, would have relished this book for its scope and well-selected detail', Rory Brennan, Books Ireland (February 2010).

‘The bulk of Murder Trials in Ireland gives a methodical and intriguing breakdown of the processes of trial for murder ... There is a very full index, a useful bibliography, and a table of the key statutes that impacted the relevant processes of the law. Each chapter offers a nuanced discussion of the key aspects of the processes to which it is devoted and a clear delineation of the key changes that occurred in hem. The prose is clear, and concise and witty turns of phrase often cut through the legalese and jargon that could have shrouded the author’s points. Along with the meticulous research upon which the study is based, this is a clear indication that this is a work of considerable scholarship, founded on a real understanding of the subject and underpinned by a substantial knowledge of the period … This book is an important work of legal history. It is extensively researched and elegantly written', Neal Garnham, Victorian Studies (Spring 2011).

‘In this comprehensive overview of the procedures involved in the nineteenth-century murder trial, W.E. Vaughan illustrates the complexity of nineteenth-century criminal procedure ... One of the book’s strengths is that the author describes in detail the roles played by the various actors in the nineteenth-century criminal justice system – coroners, stipendiary and ordinary magistrates, members of the Royal Irish Constabulary and the Dublin Metropolitan Police, assize judges, clerks of the Crown, clerks of the peace, Crown solicitors and Crown counsel, defence counsel, sheriffs, coroners’ jurors, grand jurors, petty jurors, and the Lord Lieutenant. Vaughan’s clear writing style and rhetorical flourishes do much to bring these characters to life', Dr Niamh Howlin, Irish Journal of Legal Studies (2011).

‘George Orwell’s observation that the English newspaper-reading public enjoyed nothing so much as a good murder trial might well have been extended to include the Irish public also … Dr Vaughan’s fine specialist study of the capital-trial system as it operated in Victorian Ireland is all the more welcome not only for the gap it fills in our understanding of a process which in the Irish context differed in many respects from that of English but also for its erudition, its astonishing grasp of obscure legalisms, and its wonderfully black wit … Dr Vaughan, with a logic and clarity not always (or easily) to be found in his primary sources, proceeds to uncover and unravel the various complexities of warrants, indictments, jury practice, trial, verdict and judgment … Dr Vaughan’s task in disentangling the nuances of the law from the delicacies of its implementation plainly was no easy one … but the author has defeated all such dragons and presented his findings in language that is not only accessible but makes this book a pleasure to read and a deserved landmark in the history of the Irish legal system', Gerard O’Brien, Irish Historical Studies (2010).

'Murder trials, rife with undercurrents of rage, fear and frustration, have been the stuff of high drama throughout the ages. They offer fine entertainment value, too, as perennial subjects of newspapers, books, theatre, film and song. W.E. Vaughan’s Murder Trials in Ireland, 1836–1914 probes the period’s homicide-related jurisprudence because it “represented the actual working of the criminal justice system at its most elaborate, careful, and strained.” The time period is practically and politically apropos: Convict Reference Files became a separate entity in the National Archives in 1836, and 1914 ushered in the Great War, with the Irish War of Independence not far behind. The period also covers the dark days of the Great Famine and mass emigration. The volume’s wealth rests in riveting details … An intricate tour through the era’s engines of justice ushers readers through a maze of warrants, arrests, indictments, lawyers’ roles, coroners’ duties, arraignments, bail, depositions, juries, witnesses, and some of the sideshows attached to each … circumstances surrounding confessions shock contemporary minds … the discussion of witnesses is one of the most absorbing parts of the book … comprehensive, richly researched, and flush with bountiful studies of depravity, suffering, and fortitude, W.E. Vaughan’s masterful undertaking bridges gaps in grasping the evolution of legal protocols surrounding Irish murders from 1836-1914', Mary McWay Seaman, The Celtic Connection (May 2010).

‘W.E. Vaughan’s scholarly analysis of murder trials in Ireland is a well written account of crime and criminal procedures in nineteenth century Ireland. It fills a much needed gap in our legal knowledge of process, procedures and substantive criminal law. As such, the book is to be highly recommended and it will take its place as required reading for scholars interested in how the common law was adapted and applied in Ireland … There is an excellent index and select bibliography which makes the book very useful for future research … Vaughan’s work offers an impressive analysis of the complex and subtle rules and procedures at work in the criminal trial process … There are marvellous glimpses of how the criminal justice system was perceived by the various stakeholders … Vaughan has managed to provide a readable and fascinating account of criminal justice in a period where crime and justice were heavily contested. This is a remarkable story that attempts to bring together from many diffuse sources an insight to the often neglected parts of the criminal law in nineteenth century Ireland', John McEldowney, The Irish Jurist.

‘Dr Vaughan’s new book dealing with murder trials between the advent of Victoria and the outbreak of the Great War, a well defined historical period, both in terms of law and of society, casts an interesting light on people, life and death in Ireland … this book deals with the whole process of trial for murder, from the discovery of the crime and the inquest through to the verdict and the execution. It deals with the normal, the everyday nature of Irish murder. As such it is of the greatest interest to all students of Irish society, whether historians, psychologists, or even moralists … This is a richly detailed book, the result of long and elaborate researches, published under the auspices of the Irish Legal History Society, which aims to advance our knowledge of the role of law in Irish society. This will not be a book for everyone, but it is nevertheless an important one, the outcome of immense and very careful research in the surviving records … in keeping with the best traditions of modern historical writing, Dr Vaughan drawing on his immense range of very varied sources, exposes a society in the process of constant change in which the formalities of the legal process gave an appearance of continuity', Peter Costello, The Irish Catholic (15 July 2010).

‘Vaughan discusses the prosecution of murder in Ireland from 1836-1914. Murder is the topic because these cases are well documented and are more likely to bring up points of law that require refining. Vaughan follows the procedure from the initial discovery of the murder through to the execution of the sentence. Using examples from several cases, including transcripts of interrogations, the complex subtexture of the legal process is brought to life. By having each chapter cover one segment of the proceedings, changes occurring in the laws and in custom are made clear', Reference & Research Book News (February 2010). 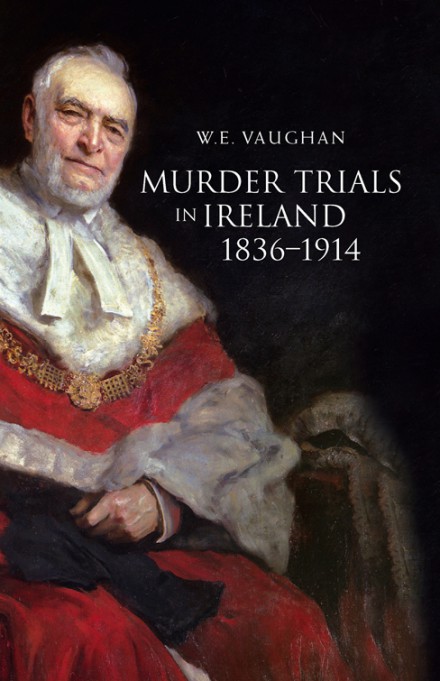