Cases of breach of promise to marry were tried frequently in a variety of Irish courts from the late eighteenth to the twentieth centuries. Such cases provided lawyers with lucrative incomes and newspapers with titillating stories for their reading audience. The majority of breach of promise cases were successfully taken by women and many won substantial damages. One barrister claimed, in jest in 1873, that Abbeyfeale, Co. Limerick, was ‘notorious for breach of promise cases’. While this was an exaggeration focusing on Limerick offers a useful way to assess and interrogate breach of promise cases more generally in Ireland. These cases can tell us a considerable amount about courtship rituals, reveal the significance of monetary considerations in marriage settlements, and the value that was placed on women’s, and men’s, reputations. Such history also alerts us to the importance of family in either protecting their children from unsuitable marriage partners, or pursuing appropriate ones. Issues of class are also highlighted and reveal the unwillingness of society, at least as expressed by jurors, to condone cross-class alliances. Through their focus on the emotional, material and financial elements of courtship these cases provide a fascinating insight into social and personal relations in Ireland.

Maria Luddy is Professor of Modern Irish History at the University of Warwick. Her most recent book is Prostitution and Irish Society, 1800–1940 (Cambridge, 2007). 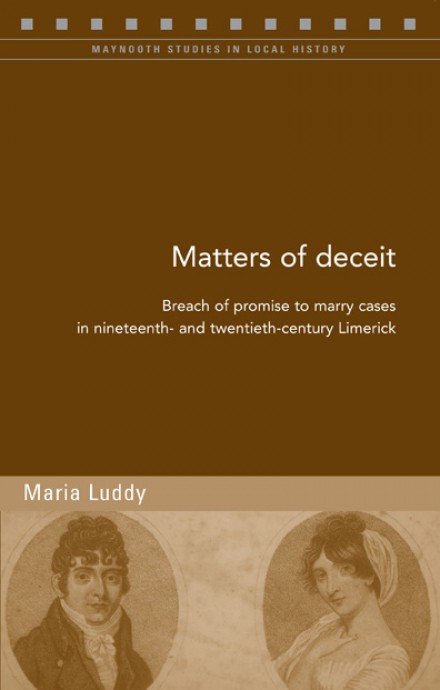