'Is it about a bicycle'?

Flann O'Brien in the twenty-first century

‘The volume as a whole, which opens with a short foreword by the brother, Micheál Ó Nualláin, is bookended by Frank McNally of the Irish Times, who joins the ranks of those Flanneurs who have always regarded O’Nolan as the vital third part in the Holy Trinity of modern Irish writers: alongside Joyce the Father, and Beckett the Son, O’Nolan remains the Holy Ghost in the machine. Overall, the book is a welcome contribution to the growing body of O’Nolan scholarship', Keith Hopper, Irish Times (26 March 2011).

‘It’s often said of Flann O’Brien that his work, by complete contracts with Joyce’s, has escaped serious critical attention … but as of today, it appears the great man may finally have run out of luck. The 45th anniversary of his death seems certain to unleash a frenzy of academic interest, climaxing with his 100th birthday in October … the season’s first shots have already been fired with the publication of a book called ‘Is it about a bicycle?’: Flann O’Brien in the Twenty-First Century. This is a collection of 10 essays, nine of them by eminent scholars. And I don’t think I’m ruining the plot for readers when I answer the question in the title. No, the book is not about a bicycle, really. It does, however, tackle other important subjects', Frank McNally, ‘An Irishman’s Diary’, Irish Times (April 2011).

‘This collection of essays, edited by O’Brien scholar Baines, examines O’Brien’s body of work and how it relates to twentieth-century Irish culture and literature. With a foreword written by O’Nolan’s brother, Micheál Ó Nualláin, this book appeals to fans and scholars of this great writer', Reference & Research Book News (June 2011). 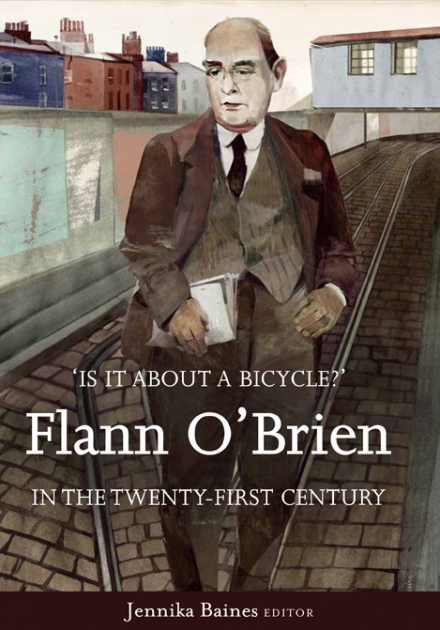