Ireland and Spain in the reign of Philip II

‘The author employs a formidable array of primary sources drawn from a broad range of continental archives … The author is most successful in using Spanish archival sources to locate Ireland within Philip II’s wider foreign-policy concerns … this book serves as a reminder that, though Ireland was being steadily (and often violently) integrated into an emerging Protestant British state, it must also be seen as belonging to a wider Catholic world', Christopher Maginn, EHR (August 2011).

'The doctoral study: La cuestión irlandesa en la política internacional de Felipe II, formed the core of Dr. García Hernán’s publication Irlanda y el Rey Prudente (2 vols, 2000 and 2003). In view of the recent flourishing of a new historiography concerning the centuries old relationship between Ireland and Spain, the translation and augmentation of the study of ‘Ireland and the Prudent King’ into this book Ireland and Spain in the reign of Philip II, is a most fundamentally important and welcome contribution. Dr. García Hernán’s methodology differs from the norm in what is referred to in continental Europe as the ‘Anglo-Saxon practice of History’. Instead of incorporating the historiography of the period and its issues as a central discursive element in his narrative, he has concentrated on exposing the evidence from the wealth of primary archival sources that he has researched and interpreted. His intention is, primarily, to let the archival testimony inform his study and by extension, the reader. Like a master-huntsman whose skilled in ferreting rabbits out of warrens, Dr. García Hernán has provided the community of scholars with a valuable service in ferreting out hitherto unknown information concerning Philip II’s relations with the Irish from a wide range of Austrian, Bavarian, Belgian, British, Irish Portuguese, Roman and Spanish archival sources and placing it in the public domain. It may well be expected that this work will stimulate further scholarly investigation, interpretation and debate among historians. Such deliberation is to be welcomed!', from the foreword by Dr Declan M. Downey

‘Hernán adds a new dimension to our understanding of the interaction between Ireland and Spain and the role of Irish exiles in the reign of Philip II', Books Ireland (September 2009).

‘Most textbook accounts of the defeat of the Spanish Armada in 1588 note only that Spanish sailors who were washed ashore in Ireland were protected. They do not mention how many Irish were part of the Spanish invading force, including many noblemen. Hernán rectifies the omission in this study of the interaction between Ireland and Spain in the second half of the sixteenth century. The connection between the two countries was tight. To begin with, the archbishop of Dublin was a Spaniard. The countries shared a belief in Catholicism and a hatred of the English that were enough tot unite them in common cause. In Spain the Irish were not treated as members of a subject nation. Using mainly primary sources, Hernán chronicles the Irish wards from 1565–83, the Armada and the after effects of the English victory. He ends with a look at some of the individual Irish who traded, fought and spied for Spain and at the Counter Reformation as experienced by the Irish in exile in Spain. This is an important corrective to the numerous Anglo-centric histories of the period', Reference and Research Book News (November 2009).

‘Enrique García Hernán dexterously points out in Ireland and Spain in the Reign of Philip II [that] Ireland was never as important to Spain as Spain was to Ireland. The distinctive feature of García Hernán’s work is that it draws on a wealth of Spanish and Italian archives not usually mined for Irish studies. The result is an exciting new perspective on Ireland’s affairs … the insularity of Ireland, so often regarded as the key to the country’s history, yields to international networks of correspondence, trade, migration and intrigue', Richard A. McCabe, Huntington Library Quarterly (April 2010).

‘This book is a revised, synopsised, and translated version of the author’s previous work, Irlanda y el Rey Prudente (2 vols, 2000 and 2003) … the present volume displays extensive archival research … García Hernán presents a lot of information about the relationship between Spain and Ireland in the late sixteenth and early seventeenth centuries … He has uncovered a massive amount of evidence that reveals that early modern Ireland and Spain were more closely interrelated than most scholars realize', Michael J. Levin, Renaissance Quarterly (May 2010).

‘This updated and abridged translation provides a detailed narrative of interaction between Irish rebels and the Spanish government from the First Irish War (1565–78) to the succession of James VI/I (1603). Scholars will certainly find much useful information about the incessant intrigues and movements of Irish clerics and rebel leaders, many of whom moved to northern Spain to await liberation from English rule', C. Ingrao, Choice (June 2010).

'Provides a valuable case study of Philip II’s meticulous nature and the utmost caution he revealed in state affairs … This book makes an important contribution to Irish historiography and encourages further research and writing … The author casts new light on how, from the 1560s until the early 1600s, Spain posted a real and present danger to English rule in Ireland … García Hernán ably demonstrates how Ireland was one of numerous priorities and financial burdens which weighted upon Philip II, and how the Irish in Spain organised themselves, revealing both individual and mutual agency to set in motion events which shaped the politico-religious outlook amongst generations of Ireland’s émigré population', Dr Benjamin Hazard, Studies (Winter 2009–10).

‘Perhaps the most fascinating and original part of the book is the assessment of the role of the Irish in Philip II’s army. At first undisciplined and unduly violent, the Irish rebels eventually became a professional fighting force skilled at guerrilla tactics and hand-to-hand combat. Furthermore, Irish traders opened up important commercial channels between Ireland and Spain, sometimes slipping much-needed English goods into the country in spite of an embargo. In addition, they provided important military intelligence … [this] fact-filled book is packed with details, including the minutiae of negotiations, political manoeuvring, and descriptions of armies and battles … this is a tremendously worthwhile study, for it sheds considerable light on an aspect of European history that is still imperfectly understood', Barbara Mujica, Sixteenth-Century Journal (Autumn 2011). 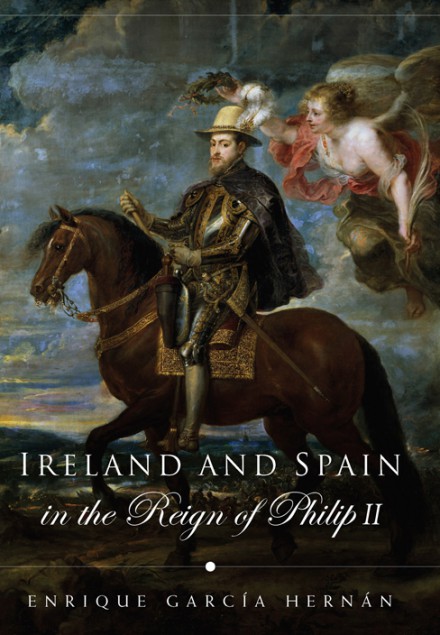