'One of the great pleasures of life is reading a book that opens new avenues of thought and knowledge for the reader … Leach’s book is a model of scholarship and highly recommended', John Kirkaldy, Books Ireland.

‘Leach’s diverse subject is held together by a strong argument and wide research … his account is the first to move Ireland’s intelligence relationship with the United States and United Kingdom into the postwar years, and he has effectively debunked the myth of Ireland offering sympathetic shelter to pro-Axis fugitives. In doing so he has greatly enhanced understanding of the singular stance often adopted by Irish foreign and security policies', Michael Kennedy, American Historical Review (February 2010).

'To this day Breton historiography is permeated by the idea that Ireland was a natural, logical refuge; however Leach shows that the fugitives’ expectations reveal more about Ireland’s place in their own political imagination than Irish willingness to aid minority nationalist groups … Since no previous study has offered such a comprehensive discussion of the history of the Welsh establishment’s support – and that of Plaid Cymru members in particular – for Breton fugitives, the most intriguing chapter for the readers of Barn in Leach’s book will be the fourth: "Real pan-Celticism: Welsh support for Breton nationalists, 1946–8"', Richard Glyn Roberts, Barn (trans. from original Welsh; March 2010).

‘A very interesting study which sheds light on an obscure aspect of Irish government policy vis-à-vis its neighbours in the EU', Books Ireland (Summer 2009).

‘In the decade after 1945, the Irish government granted political asylum to various European ethnic nationalists – Bretons, Basques, Flemings, Croats, Ukrainians and Cossacks. Bretons and Basques had sought refuge in Ireland before the War but some of the minority nationalists who arrived after 1945 were wanted for war crimes and collaboration with the Axis powers. Many of them claimed to be inspired by the Irish independence struggle but this was a mixed compliment for the Irish government. As Daniel Leach observes, that Ireland sheltered these fugitives at a time when Nazism was reviled seemed to confirm the pro-Axis sympathies of the Irish during the war. As his book reveals, the picture was more complicated. A common assumption was that the Irish government was motivated by an “inter-Celtic solidarity” but Leach argues that while this may have existed in the cultural sphere, practical political assistance from Dublin was non-existence. The true inter-Celtic exchange, as Leach highlights throughout the book, was between the Welsh nationalist and the Bretons … Leach places Irish post-war asylum in the context of the Cold War and Catholic anti-communism when the Allied intelligence services and the Catholic Church assisted those who could destabilise communist regimes. This was the murky underworld of the ratlines which spirited away war criminals to north and south America. Leach’s account of Croat Alois Anitch, alias Andrija Artukovic, makes particularly queasy reading. He was deeply implicated in the Ustase genocide of the Serbs during the war and came to Ireland in 1947, helped at every stage by the Catholic Church. When he and his family left Ireland a year later for the United States, they had Irish documentation … The era of these minority exiles has now passed but their implications for a new generation are thoughtfully described in this book', Deirdre McMahon, Irish Times (9 May 2009).

‘The author has done scholars a favour in unveiling in great detail a hitherto murky chapter in Ireland’s history: Dublin’s role in sheltering those fleeing the collapse of Nazi-occupied Europe … It is as if the author has lifted a stone to expose a motley crew of crypto-fascists who made their way here in the belief – correct, as it turned out – that they would be left more or less undisturbed as they licked their wounds in the confused post-war years of the late 1940s. They found it far more preferable to settle in Ireland than face the judgment of the courts in France, Belgium and elsewhere, where they could expect to face long prison terms or even the death penalty … One of the most hair-raising episodes recounted in this book describes the ease with which Hitler’s infamous SS commando officer, Otto Skorzeny, was able to come here in the 1950s, buying up no fewer than seventy estates and even meeting the justice minister, Charles Haughey (pp 183-4) … Leach deserves credit for his extensive spadework on a difficult subject', David O’Donoghue, Irish Historical Studies (2010).

‘... reveals, for the first time, how Ireland provided a shelter for many European militants and nationalists before and after Second World War. Though many were inspired by Ireland’s struggle for independence, others were fleeing their home countries accused of crimes of collaboration with the Nazis ... a publication like Fugitive Ireland: European minority nationalists and Irish political asylum, 1937-2008 is essential to our fuller understanding of the period and the subject ... This brilliantly researched volume grapples with this central issue through the examination of the personal histories of each of his subjects and ultimately the lives that they carved out for themselves in Ireland ... With fine illustrations, many courtesy of family members of the émigrés, this book is an immensely important contribution to our understanding of this little known chapter of Ireland’s past, indeed, it is precisely the area of our history that some would prefer remained our “Hidden History'', Michael Merrigan, Ireland’s Genealogical Gazette. 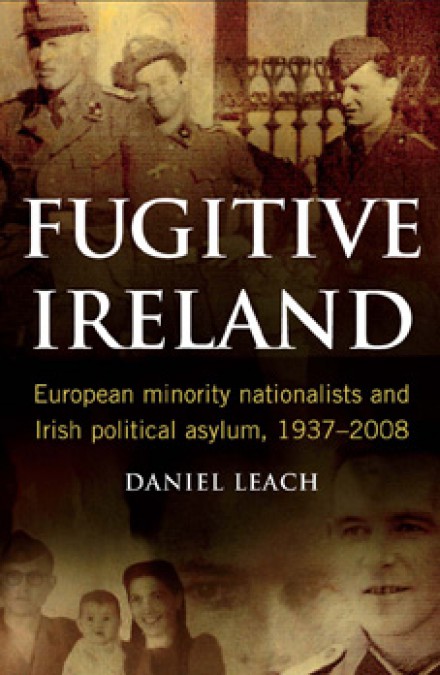