‘The twenty-six pages of the introduction are an interesting and useful essay on the Scandinavians in Britain and Ireland and their linguistic influence … This volume is a most valuable contribution to the study of the languages in question, and in an age when university authorities in particular are keen on interdisciplinary studies it seems likely to have a long life span', Diarmuid Ó Sé, Celtica (2013).

‘Diarmaid Ó Muirithe traces the remnants of the Viking raids and settlements in the everyday speech of the peoples of Britain and Ireland … [this is] a captivating read by any standards … As a dictionary Ó Muirithe’s work is also of immense value to study of placenames and, in many cases, surnames – especially those derived from nicknames. His treatment of the Norse and Danish influence on their sister Germanic languages of Scots (incld. Ulster-Scots) and English, is extensively referenced which is excellent for students of literature, especially poetry. This new dictionary is a wonderful resource for studies in many disciplines', Michael Merrigan, Ireland’s Genealogical Gazette (September 2010).

‘As [this] fascinating new book points out, the pillaging was not all one-way, especially in the area of language … the Scandinavians also lent us their own vocabulary, without which English and – to a lesser extent – Irish would be poorer today. [This book] is the latest work of scholar and Irish Times columnist Diarmaid Ó Muirithe, whose modest admission that it represents “but a sampling” of the presumed total makes his 300-page epic no less impressive', Frank McNally, ‘An Irishman’s Diary’, Irish Times (9 October 2010).

‘Erstwhile literature professor and now author of the Words We Use column in the Irish Times, Ó Muirithe cites words borrowed from Scandinavian tongues mostly by people in Scotland and Ireland … the articles include meaning in English or the Celtic language, exemplar quotations, the donor language and meaning if different there, and references. An index of the Scandinavian words is provided', Reference & Research Book News (February 2011).

‘The book has a very ambitious aim, includes a breadth of material which is certainly commendable, and will be useful for anyone interested in the lexical effects of the linguistic contacts arising from the presence of the Scandinavian newcomers in Britain and Ireland … this dictionary can be recommended as one of the first sources of information for anyone interested in Norse-derived terms in the languages of Britain and Ireland', Sara M. Pons-Sanz, EHR (February 2012).

‘Ó Muirithe’s dictionary ticks a lot of boxes. It is an impressive work, broad in scope and dripping with references and etymologies which will be of interest to the expert and lay reader alike. It will also look equally good on a book-shelf or coffee-table. My advice is to buy it', Alan Macniven, The Journal of Scottish Name Studies (2011). 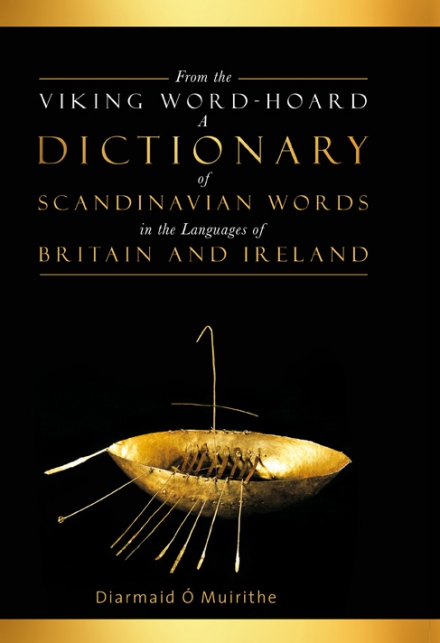