'... read about the first maternity hospital, the use of the Rotunda Pleasure Gardens for sexual cruising, the spread of red-light districts and venereal hospitals servicing the large number of British soldiers, and the role of other hidden institutions in Dublin before and after the Act of Union. It makes a fascinating story well told', Professor Murray Fraser, University of Westminster.

'[A] hugely entertaining account of the efforts to establish hospitals in Georgian Dublin … Boyd’s colourful narrative doubles as atmospheric social history and makes effective use of the sources of the day, including the Rotunda’s records, prints and drawings and accounts', Eileen Battersby, Irish Times.

‘Dublin, 1745–1922 is lively and accessible – largely because Boyd quotes contemporary voices at length. His own prose style has enough wit and evident suspicion of the pieties of other ages and our own to keep the reader’s interest.…Any Dubliner, anyone with an interest in the city’s history and development, or with an interest in the history of medical and obstetric practice, will find much of interest and find their impression of Georgian elegance modified', Seamus Sweeney, Times Literary Supplement.

'Dr Boyd’s monograph is more than a welcome contribution to urban historical geography since it also pioneers important elements of medical geography in the past', Hugh Clout, Annales De Geographie.

‘This is an elegantly written, engaging and stylish work. Visual imagery is an important part of the story and the many illustrations that are included enhance the volume', Laurence M. Geary, Urban History.

‘This is an ambitious and very well-illustrated book, which reveals new and original insights into the medical and sexual geography of Dublin, especially during the eighteenth and early nineteenth centuries', Yvonne Whelan, Journal of Historical Geography.

‘Gary Boyd’s book on the old Dublin hospitals is fascinating stuff. What is equally fascinating is the amount of detail he has dredged up about prostitution in the city in the eighteenth and nineteenth centuries. He explains not only who was doing what, but how sexual diseases were treated in primitive fashion and, most importantly of all, how the moral management of such treatment was carried out. Normally, the history of hospitals as institutions can be esoteric enough, a subject that may not appeal beyond the specialist reader. But Gary Boyd has done his subject a great service by spreading his net. His treatment of the subject is matter-of-fact and well-informed, without being overtaken by abstruse academic erudition. Neither has he gone in the other direction, heading towards the Irish Sun. All in all, a most useful dissertation on the subject', Hugh Oram, Books Ireland (April 2008). 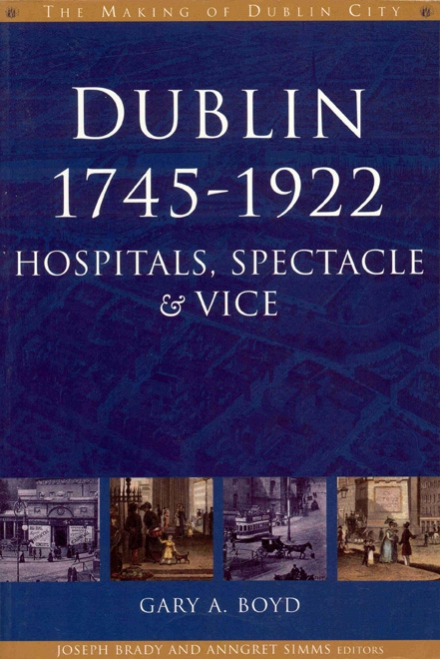