The cathedral of the Holy Trinity, Dublin, commonly called Christ Church, is by Irish standards rich in archival and architectural remains, and so it comes as something of a surprise to learn that this is the first full-scale history of the cathedral to be written. That the time has now come for the situation to be redressed owes much to the attention that has been paid in recent years to the records and architecture of Christ Church. The painstaking work of scholars from the different academic disciplines of history, music, literature and art, have distilled from the evidence much that had previously been hidden.

To quote from the Introduction, Christ Church has reflected in its architecture, administration and worship, and in the people who made those things possible, the changing face of Ireland. It has experienced the trauma of the Reformation, and, centuries later, of disestablishment and of political independence. Whether pre-Reformation as an Augustinian priory, or post Reformation, as the monarch's Chapel Royal in Ireland, 'where the government came to church', or indeed from the late nineteenth century as metropolitan cathedral for the Church of Ireland dioceses of Dublin and Glendalough, Christ Church has played a prominent part in national and civic life. Furthermore, the cathedral archives throw intriguing light, not only on matters of importance to church and state, but also on many aspects of everyday life in Dublin.

This telling of the cathedral's story falls into three parts: the medieval, the early modern and the modern. Within each of these periods attention is paid to the national and ecclesiastical context within which Christ Church functioned, and to the cathedral's architectural, liturgical and musical developments at the time. Following an 'Introduction' by Raymond Refaussé, largely devoted to a survey of the manuscript sources for the book and of the use that previous writers have made of them, the medieval section commences with narrative accounts of the years 1030–1300 (Stuart Kinsella) and 1300 to 1500 (James Lydon).

Then follow chapters on the architecture of the medieval cathedral (Roger Stalley), its liturgy (Alan Fletcher) and music (Barra Boydell). The fabric of a cathedral long regarded as essentially Victorian in character is here shown to have very considerable architectural continuity with its medieval past. The building has been the setting in which, for the greater part of the second Christian millennium, the worship of Almighty God has taken place, and due attention is paid to the central role that liturgy and music have played in cathedral life.

Treatment of the early modern and modern periods follows much the same pattern, the narrative chapters being written by Raymond Gillespie and Kenneth Milne together with contributions by Roger Stalley on architecture and Barra Boydell on music. The epoch-making Reformation period of the sixteenth century and the Cromwellian and Jacobite interludes of the seventeenth, were times of great tension and dislocation for Christ Church. Less colourful, though scarcely less dramatic in their implications for the cathedral, were those acts of parliament of the nineteenth century that changed utterly the ecclesiastical structures within which Christ Church operated, and indeed were instrumental in the re-structuring of the governance of the cathedral itself. Within fifty years of disestablishment came the setting up of the Irish Free State, which brought further changes to the political and social environment, with which dean, chapter and board had to grapple. A brief Postscript covers the most recent decades of the twentieth century.

Dr Kenneth Milne is historiographer for the Church of Ireland and author of The Irish Charter Schools (1996). 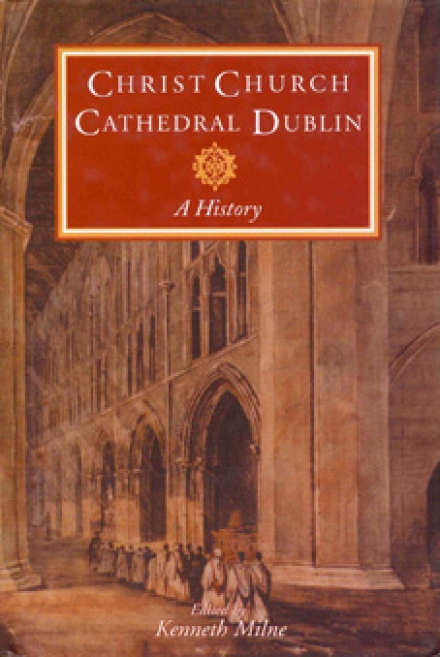