Cardinal Paul Cullen and his world

[A] handsomely-produced volume … contributions from 27 scholars who each either examine some particular aspect of Cullen’s life, follow a closely-defined theme, or, alternatively, position Cullen against wider landscapes of nineteenth-century political or religious history … This collection of essays on Cardinal Cullen is to be warmly welcomed. The editors should be commended on how they managed to assemble such a number of contributions from the organised conferences and turn them so quickly into a volume … this is a collection that will be of enormous importance for years to come and will, doubtless, inspire other scholars to take up the multiple strings of enquiry that remain to be followed', Salvador Ryan, Milltown Studies (Winter 2012).

‘This volume presents twenty-seven essays examining diverse aspects of Cullen’s life and career. The results impressively deepens out understanding of one of nineteenth-century Ireland’s paramount public figures … the contributions in this volume are engaging, interesting, important pieces that demonstrate the vibrancy of Victorian Irish Catholicism. Through its integration of cultural, intellectual and political history, and strong emphasis on the diversity and complexity of Paul Cullen, this volume in turn emphasises the diversity and complexity of a Church once tarred as monolithic', J.J. Golden, Ecclesiastical History (October 2012).

‘This new book, with its papers by 27 specialists, examines why Cullen is regarded as the prelate who influenced modern Irish society more than any other bishop … At the age of 17, Cullen went to Rome and lived there for the next 30 years as a student and professor at the College of Propaganda and later as rector of the Irish Colleges. Like a second Patrick, he returned to Ireland with a mission – to end the squabbling among the bishops; bring discipline and uniformity of religious practice to a Catholic community emerging from the disaster and disruption of the Famine; and link the Irish Church ever more closely with the centralising policies of Rome. That his mission was, to a considerable extent, successful is the subject matter of this important book … These essays stress the archbishop’s involvement in the religious revival and his unquestioning loyalty to, and even veneration for, the pope’s person and office … Not only is the central theme of Cardinal Paul Cullen and his World – the ‘Romanising’ tendency of the Irish Catholic Church – very topical indeed, but the quality of the book itself does high credit to the editors, contributors and publishers', Donal McCartney, The Irish Catholic (11 August 2011).

‘Cardinal Paul Cullen was the towering figure of modern Irish Catholicism and arguably the most important figure in modern Irish history between the death of Daniel O’Connell and the rise of Charles Stewart Parnell … this is a weighty and nuanced book … it contains masterful original research by some of the finest historians and scholars working on Irish religious history in its domestic and international contexts. The contributors rescue Cullen from the stereotypes, common until recently, that presented him as an anti-national “castle-bishop”, more Italian than Irish and preoccupied only with politics and ecclesiastical revival. They demonstrate that his correspondence reveals someone who defies east categorisation … it is surely legitimate to see Cullen as the individual who created many aspects of the governance and style of an Irish Catholicism that was, in the long run, exposed as too rigid, lacking sufficient humanity and too subservient to Rome. For those seeking to put that Catholic evolution into a proper historical context, this richly layered book is a very good place to start', Diarmaid Ferriter, Irish Times WeekendReview (Sunday 10 September 2011).

‘Cardinal Paul Cullen was one of the towering figures in 19th-century Ireland and the dominant position of the Catholic Church in independent Ireland owed much to his assertion of the church’s rights under British rule. As these essays show, there was more to him than simply a churchman', Books Ireland (September 2011).

‘Regardless of whether his legacy excites admiration or regret, historians of Irish Catholicism, church/state relations, Irish nationalism and the religious world of the Irish diaspora, as well as of wider issues of ultramontanism and the history of the papacy, invariably turn to the ‘Cullen era’ as the most crucial period from which to embark on a consideration of wider historical debates … this is an ambitious collection […and…] an important collection of essays, many of which represent scholarship of the highest calibre, covering a range of aspects of social, economic and political change in the second half of the nineteenth century. These are a series of insightful essays from a range of fine historians, which will command attention … this book can be returned to time and again and read selectively on a diverse range of topics', Conor McNamara, History Ireland (November/December 2011).

‘This handsome volume contains 27 essays … the contributors are a wide range of profession historians, ecclesiastical, political and social … The contents of this book cover all the areas where Cullen was most active and influential, most if not all of them controversial … While each topic is considered separately in its own context and there is no unnecessary overlapping of material, there is sufficient common ground in any particular section of the book to leave the reader with a reasonably vivid and consistent impression of Cullen’s life and work … Because this splendid book on Cardinal Cullen is hardly likely to be surpassed for some time, it can be safely recommended for libraries and anyone with a general interest in recent Irish Church history. The standard of publication is on a par with the contents. It is well laid out, well proofed, well illustrated, with clear readable print, interesting notes on the contributors, accessible footnotes at the foot of each page and a useful index', Seosamh Ó Dufaigh, Seanchas Ard Mhacha (2011).

‘The editors of Cardinal Paul Cullen and his world are therefore to be commended for rising to their task with considerable, albeit subtle, skill … Dáire Keogh and Albert McDonnell have assembled an excellent mix of contributors to what is a most welcome and illuminating book … these twenty-seven wide-ranging essays offer much to consider … Sean Connolly contributes a masterly reflection on the “devotional revolution” … this book is a well-judged, necessary and important addition to our understanding of a key figure in Irish history', Sarah Roddy, IHS (May 2012).

‘The volume goes beyond ecclesiological issues to consider many other aspects of Cullen’s career and contributions. [It] provides valuable information and insights into many aspects of Irish life at this critical juncture in the country’s history … embellished with many well chosen illustrations and concludes with a full Index', Norman Tanner SI, Gregorianum (2012).

‘The book is full of valuable information and analysis, promising further understanding not only of Cullen but also of the complex Irish transformation from a world of confessional states into one of nation-states', David W. Miller, Catholic Historical Review (January 2013).

‘The number and range of contributions signals the breadth and depth of [Cullen’s] presence in the general history of his time, not only in Ireland but at Rome and throughout the English-speaking world', R.V. Comerford, Irish Economic and Social History (2013). 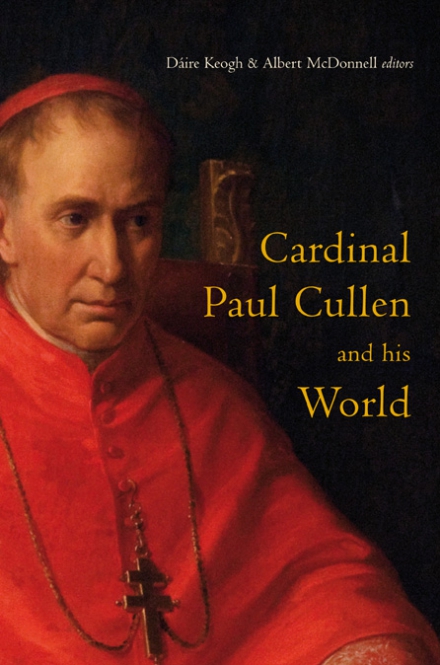