'Age of Atrocity: violence and political conflict in early modern Ireland reveals the true nature and extent of violence and atrocity in the 16th and 17th centuries as a conquering England gains territorial supremacy', William J. Smyth, Irish Times Books of the Year (2007).

'Age of Atrocity’s title says it all. The period from 1534 to 1691 – early modern Ireland – was, indeed, an era of atrocities, war crimes and brutality that today might qualify as genocide. The hunger for land, the means used to obtain it and the hatred of Roman Catholicism were eerie precursors of the atrocities committed by the new American settlers and the US cavalry in their abominable progress across the continent and their annihilation of the original Americans … a gripping volume', J. Ardle McArdle, Books Ireland (February 2008).

'Much has been written in recent years about 'negotiated settlement' in early modern Anglo-Irish relations and the role played therein by English reform programs; this excellent collection addresses the understudied bloody conquest elements of that society ... This collection challenges and provokes. One of its most useful features is an excellent historiographical introduction that includes a veritable laundry list of pressing research questions. Given its detailing of such a variety of savagery, it is not always an easy or pleasant read. But it is an important, even required one', Brendan Kane, Renaissance Quarterly.

'This fascinating and enjoyable volume consists of a collection of thirteen valuable essays on the history of violence in early modern Ireland ... This is an exciting and challenging volume that should encourage historians of Ireland and Britain to engage more effectively with their violent pasts. The essays, and in particular the introduction, make a significant contribution to a severely under-developed field and will help readers to understand the violent history of early modern Ireland', Rhys Morgan, Welsh History Review (June 2009).

‘The collection offers some thirteen contributions all of which are in themselves of considerable interest and value … these essays add considerably to our knowledge and our understanding of the place of political violence in Irish history in the sixteenth and seventeenth centuries … this is a pioneering effort in Irish history, which is laden with potential not only for further research but also for a fundamental reinterpretation of early modern Ireland … this promises to be the source of much exciting work to come', Ciaran Brady, Irish Economic and Social History (2009).

'This book covers a long time-span … it is a fascinating book with impeccable insights and scholarship, read it; use it; learn from it', Martyn Bennett, Scottish Historical Review (2010).

‘For various reasons, the violence and atrocity which were commonplace in the Irish wars of the sixteenth and seventeenth centuries have been played down. This book is an attempt to set the record straight and to set the atrocities in their broader social and cultural context … It may be harsh reading but these atrocities are not something to be swept under the carpet’, J. Ardle McArdle, Books Ireland (December 2008).

‘In the troubled history of Ireland, the early modern period stands out as one of the bloodiest. Five major wars occurred in Ireland between 1534 and 1691 ... the fourteen chapters in this book re-examine this period with reference to acts of violence, and, specifically, to atrocities executed against unarmed civilians or captured soldiers’, Patrick Little, English Historical Review (June 2009).

‘If footnotes are the infantry of an argument then this important collection of essays, featuring a formidable array of contributors, with a thousand scholarly foot soldiers in support, is well served … It is also a beautifully produced book, and Four Courts are to be congratulated on the excellent production standards for a volume whose bloody contents are presented in such an attractive skin', Willy Maley, Eolas (2009). 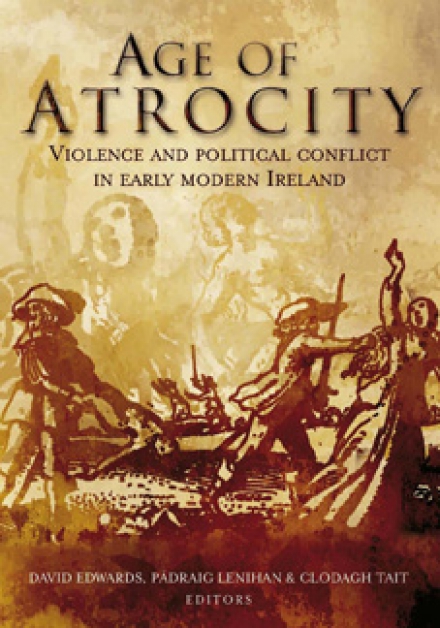