A dictionary of Irish saints

Scarcely a parish in Ireland is without one or more dedications to saints, in the form of churches in ruins, holy wells or other ecclesiastical monuments. Professor Pádraig Ó Riain’s Dictionary of Irish Saints is intended to serve as a guide to the (mainly documentary) sources of information on the saints named in these dedications, for those who have an interest in them, scholarly or otherwise. The need for a summary biographical dictionary of Irish saints, containing information on such matters as feastdays, localisations, chronology, and genealogies, although stressed over sixty years ago by the eminent Jesuit and Bollandist scholar, Paul Grosjean, has never before been satisfied. Professor Ó Riain has been working in the field of Irish hagiography for upwards of forty years, and the material for the over 1,000 entries in his Dictionary has come from a variety of sources, including Lives of the saints, martyrologies, genealogies of the saints, shorter tracts on the saints (some of them accessible only in manuscripts), annals, annates, collections of folklore, Ordnance Survey letters, and other documents. Running to almost 700 pages, the body of the Dictionary is preceded by a Preface, List of Sources and Introduction, and is followed by comprehensive Indices of Parishes, Other Places (mainly townlands), Alternate (mainly Anglicised) Names, Subjects, and Feastdays. Professor Ó Riain’s Dictionary has been described as ‘an astonishingly comprehensive, intelligent and well-organized work’; it is unlikely to be superseded for many decades to come.

When buying this book please see also: A Supplement to a Dictionary of Irish Saints: containing additions and corrections which is on our website at: https://www.fourcourtspress.ie/books/2022/a-supplement-to-a-dictionary-of-irish-saints/


Pádraig Ó Riain is Professor Emeritus of Early and Medieval Irish at University College Cork, and the previous holder of Visiting Professorships at Bochum and Freiburg in Germany and at Aberystwyth in Wales. He is a former holder of the Parnell Fellowship at Magdalen College, Cambridge, and was the first Irish scholar to be awarded the Humboldt Prize. A former President of the Irish Texts Society and a former Member of Council of the Royal Irish Academy, Professor Ó Riain is the author of numerous publications on Irish hagiography, place-names, personal names, and textual transmission. 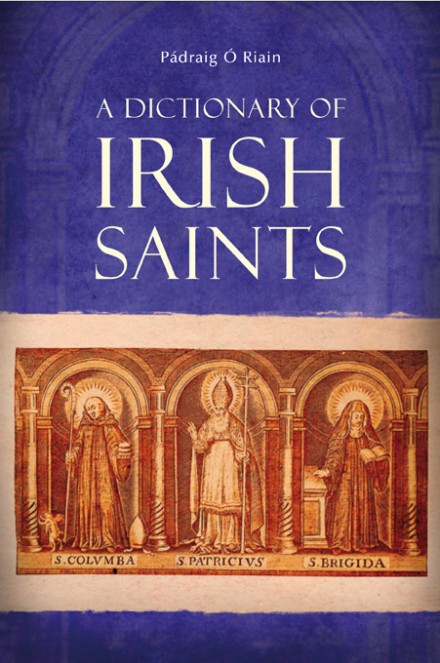