Her Keys to the City

Honouring the Women who made Dublin

“[This] book is not a compendium of Freewomen, but of women who deserved to be honoured in the past and in more recent days. It is a calendar of courageous and talented people. The women indeed are presented as more active, more engaged than that host of male worthies, many of whom seem to have been honoured because they were current celebrities. These names emerged from a public consultation back in February 2022, so they are very much the “People’s Choice”. This is the sort of book which should certainly be in every Dublin school library. Every one of them will, in some way, be an inspiration to those young women looking around for role models. The authors and their collaborators have done a fine job of putting together a book which will be widely read, and which hopefully will have a great effect.” The Irish Catholic, July 2022

“Alison Gilliland and Clodagh Finn’s Her Keys to the City: Honouring the Women who made Dublin showcases a variety of women, some familiar, others less so, who were central to major social and political changes.” Joe Culley, History Ireland, September/October 2022

“Just four women were among the 83 people given the Freedom of the City of Dublin since the award was inaugurated in 1876. The genesis of this book lies in wanting, in some way, to address this very obvious gender imbalance and to showcase a variety of the very many accomplished women who lived before us. You’ll meet some very interesting women as you read through this book – a book that gives them all the keys of acknowledgement to our city.” Lord Mayor Alison Gilliland

“Her Keys to the City is ground breaking because it looks at the huge power of women in this city and in Ireland. For too long, the streets, buildings, public spaces and lauded people who took up pages in our history books were men. I’m terribly fond of men. But as the ancient Chinese saying goes – often wrongly attributed to Mao – ‘women hold up half the sky’. We do, and the incredible women in this book certainly did. They have shaped our city/our country and it’s wonderful to see these exceptional women finally being honoured in a book that does them justice.  Perhaps other cities will take the cue from Dublin’s Lord Mayor, Alison Gilliland, and shine a much needed light on all of the under-appreciated women who have contributed so much to Irish society.” Cathy Kelly, Author

“For too long, women’s lives, stories and achievements have been forced into the shadows. This fascinating and highly readable book helps to shine a light, at long last, on the contributions made by the rest of the human race.” Margaret E. Ward, diversity campaigner and founder of Women on Air

“Like all great things, this book started as an idea: Lord Mayor Gilliland’s mission to redress the gender imbalance in honouring Dublin’s greatest citizens. Her Keys to the City wakes up these women and allows them, posthumously, to receive the recognition they richly deserve.” Sonya Lennon, entrepreneur and thought leader for workplace equality

“We are all here because of the women who came before us. If you find their stories, especially those unheard, tell them in whatever way you can. And if you can tell many of them at once, even better. This is a welcome publication about our foremothers.” Sinéad Guckian, the artist who painted republican Elizabeth O’Farrell back into the representation of the surrender at Easter 1916 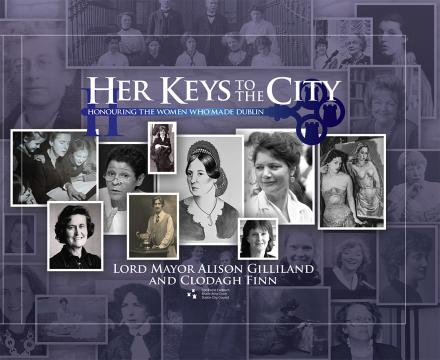 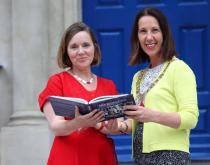