A Journal of Irish Studies. Volume 41

Éigse is devoted to the cultivation of a wide range of research on the Irish language and its literature, embracing both textual and contextual studies. Volume 41 contains articles ranging from an edition of a medieval Irish text to modern regional dialects. Other contributions in both Irish and English, from established and emerging scholars in Ireland and abroad, include the fields of place-names, keening, lexicography, the revival movement and the contents of a recently identified Gaelic manuscript in Massachusetts. This volume also contains substantial review articles on Amrae Coluimb Chille, the lives of the saints and the history of theatre in Irish, as well as a broad range of book reviews on many aspects of Irish studies.

Liam Mac Mathúna is Professor Emeritus of Irish at University College Dublin. His extensive publications on Irish language, literature and culture include Béarla sa Ghaeilge (2007), a study of Irish/English code-mixing in literature composed in Irish 1600–1900, and a new edition of An tAthair Peadar Ua Laoghaire’s ground-breaking novel, Séadna (2011). He is editor of Éigse: A Journal of Irish Studies, which is published by the National University of Ireland. He is currently engaged in a study of the Ó Neachtain circle of Irish-language scholars in Dublin, 1700–1750, and the diaries of Douglas Hyde, 1874–1912, as part of a wider project researching the impact of modernity on Irish-speaking communities. 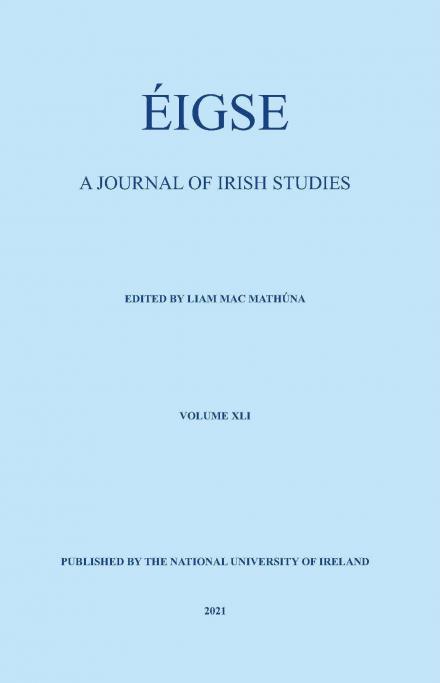