'The history of the Kings of Aileach and their encounters with the Vikings for more than two centuries is presented in a very readable style. It is a superb narrative, supported by extensive footnotes. The book is illustrated with several maps and a fine collection of colour photographs. The range of research is impressive and the book represents an outstanding contribution to our knowledge of Viking history and its importance for our complex Norse-Irish heritage and the ultimate collapse of the Uí Néill line of High Kings of Ireland.' Sean Beattie, Donegal Annual 2020


[The Kings of Aileach and the Vikings, AD 800-1060] is far more than the apparently quite localise historical study that some might assume from its title ... McGettigan does an excellent job of setting the scene ... This introduction makes the events, the personalities involved and their significance easier to follow ... Using a wide selection of primary and secondary source, the narrative is easy to follow and important observations about the nature of Viking settlement and other viking activities in the northern territories are made ... In all, a most enjoyable read for anyone interested in the complicated history of the Uí Néill and the Scandinavians of the ninth and tenth centuries.' Archaeology Ireland, Summer 2020

“This is a welcome addition to the impressive body of work by one of Ireland’s most experienced historians, Wicklow-based Darren McGettigan. It completes the trilogy that he began with The Battle of Clontarf, Good Friday, 2014 (2013) and continued with Richard II and the Irish Kings (2016). Now with the Kings of Aileach and the Vikings, AD 800–1060, his concern is with what happened before Clontarf. Once again, the publisher Four Courts has done its author proud in producing a high-quality text attractively, with twenty well-chosen colour illustrations, five maps, and two genealogical charts — essential for helping the reader to keep track of who’s who, and where’s where, in this fascinating but difficult period of Irish history ... As anyone who has tried tracing the fortunes of the Vikings in Ireland will know, it is difficult because the evidence is so fragmentary. Fortunately, McGettigan, who was a student of Francis John Byrne, proves himself on the whole to be a reliable guide to what has been found so far in the archaeological and documentary record. He is particularly strong on his handling of the fragments gleaned from the Irish annals (Ulster, Inisfallen, Four Masters, Clonmacnoise, Chronicon Scottorum, Tigernach, and the Fragmentary Annals), genealogies, poetry, and prose; and also from the Icelandic sagas, especially the Saga of the People of Laxardal and Heimskringla … Effectively, McGettigan identifies and fills a gap in the literature by bringing together diverse material about the kings of Aileach and the Vikings … Pinpointing the place-names mentioned in the documentary evidence for this period is often problematic and McGettigan takes considerable pains to make identifications as precise as possible… Perhaps the most stimulating intervention by the author is with regard to the site of Aileach itself ... we should be grateful to McGettigan for sterling work as a guide to this challenging terrain. Archives, libraries and museums with Viking-age materials, whether in Dublin, Belfast, Derry, North Down, or Roskilde, would do their clients a good service by stocking this book.” Brian Lambkin (Ulster Journal of Archaeology 75 (2019-20)) 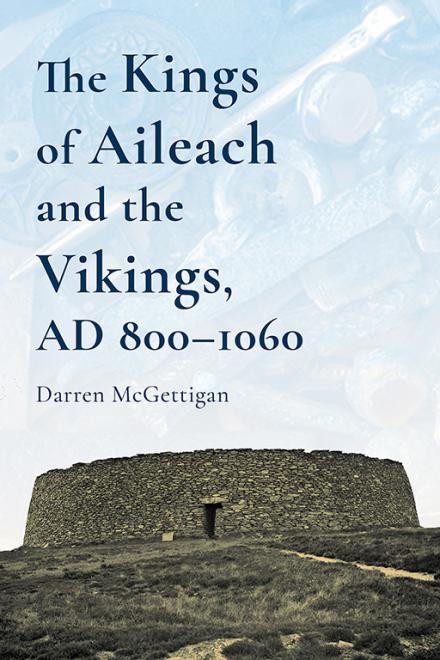