This is an account of social life in pre-Reformation Dublin, telling of its ruling class, its wealthy merchants, its all-powerful traditional church, the cityʼs personalities, and Dublinʼs unwanted Irish.

Dublin was a thriving city, the centre of English administration in Ireland with a busy port. Its citizens are recorded as having almost fifty different trades and skills and the city had almost thirty churches and monasteries. There were bustling markets and a strong municipal authority run by a merchant oligarchy. It was a settlement of foul smells in which pestilence and disease were often rife, an English city in Ireland whose inhabitants spoke English, with an unwanted Irish ethnic group, a city located in a fertile hinterland with a coastline of small ports – Baldoyle, Howth, Malahide, Rogerstown, Rush and Skerries – over which Dublin had control.

The merchants traded in Dublin, in Chester and in the English midlands, and some ventured as far south as Bordeaux. The city rulers faced many urban problems – ensuring water and food supplies for the city, maintaining its gates and walls, setting up night-watch patrols, regulating its port, and ensuring standards of hygiene. Dublin was threatened by external attacks from the Irish and expulsion was tried on the Irish living in Dublin.

The laity loved their traditional Catholic faith and the mysterious magical atmosphere created by the use of candles, darkness, colourful vestments, bells, incense and Latin plainchant. Purgatory threatened but there was the solace of devotion to the Blessed Virgin in Marian liturgies. When diocesan court procedures were ignored, disrespected or infringed, the church was ruthless, excommunicating members at a rate of two or three a week. The laity were steadily gaining access to the church and were managing parish affairs. Towards the end of our period, the church was attacked by reformers in Dublin, its relics destroyed, its monasteries occupied and its liturgical books censored.

Peadar Slattery was awarded a doctorate in modern history by Trinity College Dublin and has published a number of articles on timber and wood in medieval times in Ireland. 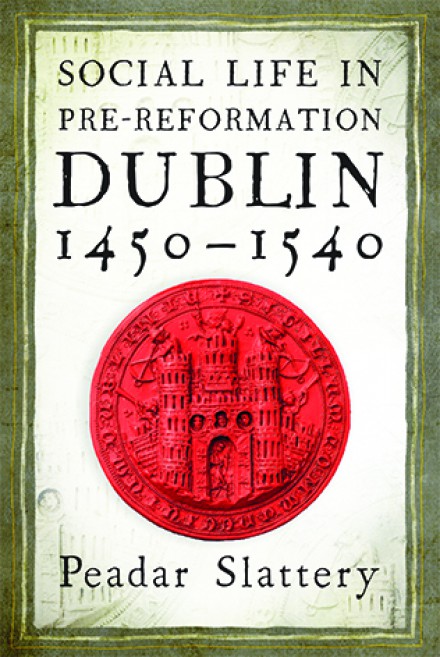