Some of the most important recent historical research on the subject of Dublin city and county in the Middle Ages is gathered together in this volume, including, in pride of place, a fundamental re-examination of the origins of the medieval diocese of Dublin by Dagmar Ó Riain-Raedel. This book also contains Theresa O’Byrne’s brilliant new investigation of the professional networks of Anglo-Irish literary scribes working in the later medieval city, Áine Foley’s history of the le Brun family who were prominent in the life of medieval Dublin for centuries, and Randolph Jones’s analysis of evidence relating to the ‘coronation’ of the pretender Lambert Simnel as king of England and Ireland in Christ Church cathedral in 1487. The volume also contains a critical re-examination by Paul Dryburgh of the Dublin connections of Roger Mortimer, first earl of March, lieutenant of Ireland at the time of the Bruce Invasion, and lover of Edward II’s queen, Isabella. Those interested in the daily life of the citizens of medieval Dublin will find a treasure-trove of information on the subject in the Anglo-Norman ‘Custumal’ known as Les leys et les usages de la cite de Diveline which survives in the Dublin Chain Book: this volume provides, for the first time, a full translation by Phyllis Gaffney and Yolande de Pontfarcy Sexton of this vital primary source.

Those interested in Dublin’s archaeological heritage will not want to miss Linzi Simpson’s major study of her excavations on the site of the medieval parish church of St John’s of Bothe Street, or the results of Antoine Giacometti’s excavations piecing together the medieval urban landscape of James’s Street. Máire Geaney presents a radical new interpretation of the carpentry involved in the Anglo-Norman waterfront revetments at Wood Quay; Sheila Dooley examines what we know and what may survive of the ‘lost’ medieval church of St Michael on the site of the modern Dublinia heritage centre; Gill Boazman provides a ground-breaking study of material culture and identity in the southern hinterland of Hiberno-Norse Dublin in the half-barony of Rathdown; and the city archaeologist Ruth Johnson describes a remarkable new research resource for medieval Dublin, the County Dublin Archaeology GIS. 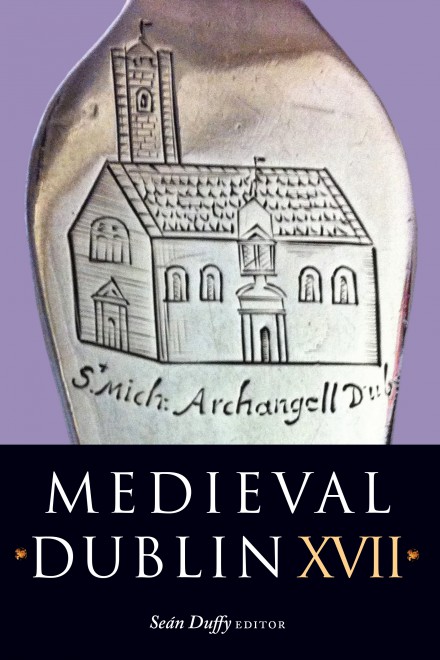