“The editors are to be congratulated for their work in presenting such a large and diverse number of essays clearly and coherently, and it should be said that all of the contributors have given of their very best for this publication, a fact which speaks volumes for the esteem in which Ríonach uí Ógáin is held in the academic world and beyond. It is not difficult to conclude that only a scholar of exceptional standing and influence could inspire a collection of essays of such excellence, a collection which shines a light on so many of the riches of the world of folklore – a field of study which is so central to Irish language and Celtic studies generally. In this regard, it is to be hoped that ‘Binneas an tsiansa’ will find a wide readership and, in particular, that young scholars will find inspiration from the many excellent essays it contains. The scholarly essays here are all written to the highest academic standards, and it is to the credit of the editors that they have included a number of more “creative” pieces as well, a decision which only adds to the importance of this volume, and to the pleasure it will give to many readers ... There are a good number of illustrations, photographs and colour plates accompanying many of the essays, all of which have been appropriately selected, and this does indeed make for “a well-made thing” – a first-class publication which is not only essential for scholars, but for all those with a general interest in folklore and its related fields of study. I would think it no exaggeration to say that the study of folklore has been greatly enhanced by this publication and, having already given credit to the editors and contributors, it is only right to conclude with a word of praise for the publishers, Four Courts Press, for yet another outstanding academic publication.” Breandán Ó Croinin, Zeitschrift für celtische Philologie, (December 2020).

In his contribution Vincent Woods recalls the words “Tá an bóthar glan is an oíche go brea, ach mar sin féin, fan go lá” (Although the road is clear and the night fine, stay ‘til morning). This welcoming sentiment—to linger longer to enjoy the craic as well as the company—serves as an apt metaphor for how to read this collection of essays, each of which is dedicated to honoree Ríonach uí Ógáin, professor, ethnograher, collector, and scholar of Irish folklore. Her notable toil in the vineyard of Irish language and culture stands on a par with such giants in the field as Séamus Ó Duilearga, Seán Ó Súilleabháin, Seán Ó hEochaidh and Patricia Lysacht, to mention just a few. It is little wonder, then, that twenty seven renowned and respected authors are brought together to participate in Life, Lore and Song and to offer her their scholarly tributes. It is hoped that, with Life, Lore and Song, such tales and stories will continue to encourage her—and all of us—to fan go lá: stop and enjoy the craic and good company—‘til morning. E. Moore Quinn. Irish Literary Supplement (Fall 2020)

'This bilingual Festschrift for Ríonach uí Ógáin ... is a fitting tribute to a scholar who has contributed so much to the study of Irish and international folklore throughout her career ... Comprising twenty-seven essays by maithe agus móruaisle (a who’s who) of folklore, traditional music, and Irish-language studies, this collection serves as a timely reminder of the enormous contribution by scholars in these fields to humanities scholarship in Ireland and further afield. Many of the essays will appeal to a general audience, as well as to a more specialist readership of folklorists, ethnomusicologists and Irish language scholars ... The eloquence and elegance which often emerge from folklore archives is a narrative thread which connects each of the essays in this collection ...The editors of Life, Lore and Song / Binneas an tSiansa deserve the highest praise for this outstanding Festschrift. It is difficult to imagine a more fitting tribute to Ríonach uí Ógáin', Ailbhe Nic Giolla Chomhaill, 'The Joys of Fieldwork', Dublin Review of Books (May 2020). 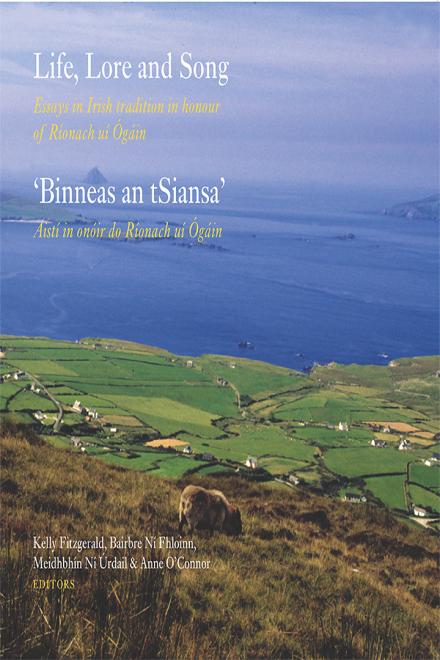