“Mary Phelan’s Irish Speakers, Interpreters and the Courts, 1754-1921, presents an illuminating and significant story based on voluminous research in a wide range of materials ranging from newspaper articles to parliamentary papers, county archives, grand jury presentment books, correspondence with Dublin Castle, and an impressive number of cultural histories from Ireland’s long nineteenth century. [It] is by any standards a fascinating account of one aspect of the process by which English became the dominant language in Ireland. This is a detailed and important study which raises questions beyond its specific remit and illuminates central issues of language and power past and present ... Irish Speakers, Interpreters and the Courts 1754-1921 is a rich, detailed and often fascinating account of the topic; it marshals a prodigious volume of evidence in support of an argument that remains pertinent. For as Supreme Court Justice Hardiman noted in2001, ‘only a person of unusual independence of mind and pertinacity will attempt to conduct his or her legal business through the medium of Irish.’” Tony Crowley, Irish Literary Supplement, Spring 2021

“One of the strengths of Mary Phelan’s study of interpretation in the Irish courts prior to the creation of an independent Irish state in 1922 is the manner in which it throws up questions about the limitations of interpretation services even as provided by law. Another is her demonstration of the relevance of the relationship between power and language in that context. Resorting not only to surviving legal records, but also to quite frank newspaper reports of the time, Phelan frames clearly important and abiding issues around matters such as accuracy and the need for interpreters to take an oath in that context, levels of remuneration required to ensure a reasonable standard of translation, the danger of bribery and the perceived partiality or impartiality of interpreters where there is not a full-time, professional interpretation service.With its well-chosen tables and figures which support rather than weigh down her lucid narrative, Mary Phelan’s book is a useful point of reference for anyone concerned about the provision of interpretation services and their implications for law and the legal system.” Colum Kenny (The Cambridge Law Journal, July 2020)

“In the opening scene of Ken Loach’s Irish civil war film The Wind that Shakes the Barley, a group of young Cork men are arrested by the Black and Tans for playing hurling. One 17-year-old boy gives his name as “Mícheál Ó Súilleabháin” and refuses the officer’s request to change it into English. He is promptly dragged into a farmhouse and killed as an example to the others. As Mary Phelan shows in this brilliantly researched slice of Irish legal history, Loach’s melodramatic storyline was based on a certain truth. For centuries, Britain believed that one key element of cementing its rule over Ireland was to suppress the natives' original language. “Those who did not acquire English were left behind,” Phelan writes, “as Irish became associated with being poor, uneducated, old and dispossessed.” In 1737 the British-controlled parliament on Dublin’s College Green took a key step towards making Irish speakers feel like foreigners in their own country. The Administration of Justice (Language) Act decreed that from then on, all court proceedings would be carried out in English and English only. Gaeilgeoirs were entitled to an interpreter, but only if they could prove to the judge’s satisfaction that they did not have more than a few words of the “correct” tongue. What did this mean in practice? Phelan answers that question with extensive reference to jury records, newspaper reports and Dublin Castle correspondence.  The 1737 Act operated as a blunt instrument of power that almost certainly led to many miscarriages of justice. There was no proper training for interpreters and no written code of ethics to guide them on how the law should work.  Above all, this is a study of social prejudice and how it can destroy lives. Since Irish speakers were often illiterate and had a mostly oral culture, they were easy to dismiss as fundamentally dishonest.  Like most good history books, Phelan’s also tells us something about the present. The 1737 Act, she points out, is still operational in Northern Ireland where political squabbling over Irish has helped to leave citizens without a parliament for almost three years. (The Irish Independent, December 2019)

"Mary Phelan's monograph on interpreters in the Irish courts makes an important contribution to a long-neglected aspect of Irish legal history ... Phelan's maps are useful in cementing our impression of the western Atlantic seaboard as the region with the highest proportion of Irish speakers and, thereby, the greatest need for Irish interpreters in court ... the value of Irish Speakers, Interpreters and the Courts is the light that it shines on the historical background to interpreter provision in the Irish courts and the logistical workings of the lower courts in pre-independence Ireland", Ciarán McCabe, UCD, The Irish Jurist (2019).

Mary Phelan’s book is encylopaedic, both in content and layout. Like Wolf before her, she offers a wealth of ethnographic detail that will be an eye-opener to most readers, academic as well as general, regarding the cultural complexity and unpredictability of a highly bilingual and diglossic society. She surveys the higher courts as well as the petty sessions, and there are separate chapters explaining how interpreters were appointed, whether and how they were paid, how they worked, and how accurate and impartial they were. There is a very effective chapter on policemen acting as interpreters, which includes a discussion of the Maamtrasna case in 1882 … The encyclopaedic aspect is particularly evident in two sections which will form an invaluable handbook for other researchers. The first is a fifty-page survey, county by county, of levels of Irish speaking and interpreter provision in the nineteenth century. The second is a compendium of biographies of eighty-five interpreters that Phelan has identified and investigated, ranging in time from James Kennedy, who was born in 1742 and worked as an interpreter in Limerick for forty-five years, to Thomas Veale, who interpreted at Dungarvan petty sessions in the early decades of the twentieth century, and who died in 1954 ... Irish was treated relatively well by British or UK standards, but that is not to say very much. Another way of putting it would be that Britain was a far more centralised polity than the multi-state Habsburg lands. That centralisation accelerated after the Act of Union. The small courts and the police were manifestations of that centralisation, as both were directed from the core and replaced mechanisms that were far more informal and local. So it was not just that contact between the Irish-speaking population and the state was growing rapidly around 1800, but also that the state was a linguistically unaccommodating one. Mary Phelan’s book is an imposing and valuable documentation of that contact. Niall Ó Ciosáin Dublin Review of Books [Issue 125, September 2020] 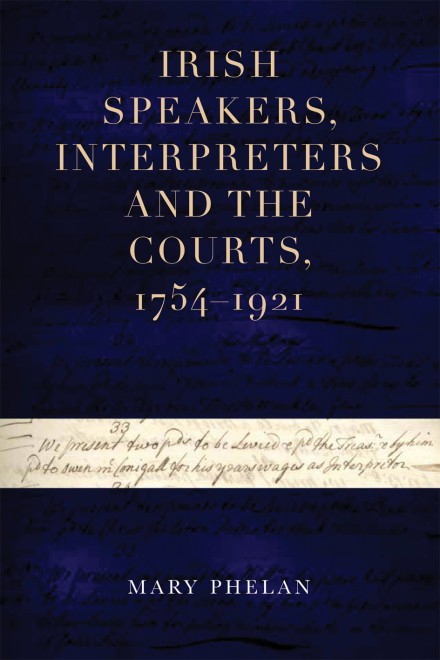