Anzacs and the Rising

“A lively and enjoyable read, Rory Sweetman’s Defending Trinity College Dublin, Easter 1916 offers a micro-history of a particular episode of the Easter Rising … A particularly engaging aspect of the book is the fashion in which Sweetman uses his sample of Anzacs to discuss the wider Empire’s relationship to the war and Ireland. It is fascinating to learn, in the middle of a discussion of wider recruiting trends, how even Sweetman’s small cohort of six were drawn from across the land of the long white cloud ... Away from the sharp end of the fighting, Sweetman has succeeded in conveying the atmosphere of Easter week 1916 and early twentieth-century Dublin more generally. The appendices and reprints of some of the primary sources on which the book is based, add to the whole. The entire text offers fascinating reading for students, academics, Irish history buffs, and anyone with a connection to Trinity College Dublin.“ Thomas Tormey, Irish Studies Review, 2022.

'Dr Sweetman turns to an often overlooked aspect of the Rising the participation of officers and soldiers from the Antipodes in suppressing the Rising in 1916 ... Dr Sweetman sees this micro conflict in the streets of Dublin as "a neglected episode in an imperial context, with Dublin as theatre of battle in a global war". The Irish Catholic (2019)

'Rory Sweetman's scholarly but still accessible new investigation ... combines witness statements from the Bureau of Military History with recently discovered letters ... this is a superb piece of historical excavation and a reminder that even well-trodden ground can sometimes yield up new treasures' - Andrew Lynch, The Sunday Business Post (2019)

'Defending Trinity College Dublin, Easter 1916 - Anzacs and the Rising ... has been meticulously researched by the author with an attention to detail and access to new material that has enormously enhanced our understanding of events of Easter Monday 1916 ... This work is essential reading for any student of the Easter Rising and it includes an extensive bibliography and copious notes.' Ireland's Genealogical Gazette (2019).

'In his book 'Defending Trinity College, Easter 1916: Anzacs and the Rising', ... Sweetman targets what he perceives as blatantly neglected aspects of this pivotal event in Irish history. His research sheds light on key actors of the rebellion that have been largely omitted from the textbooks and thus erased from the prevailing narrative of the Easter Rising ... Sweetman has placed these men firmly in the scope of Irish History.' Milena Barnes,  Trinity News (2019).

'This topical story on the action that took place around Trinity College during the 1916 Easter Rising has been mooted in history publications for a good number of years, but this is the first time I've seen it put into a book on its own ... the book is highly recommended', An Cosantóir Magazine: The Defence Forces Magazine.

'The story is fascinating. The author's research and style seem as impeccable as they are illuminating. The text - unspoiled by stylised academic - style authorship - is supported by three fascinating appendices; letters - from New Zealand and Ireland - and a list of dramatis personae ... This a first-class and effective work of casting a golden nugget of Great War history in a new light. Most highly recommended', Stand To! The Journal of the Western Front Association.

'The story is a gripping one, well told, and able to be read in a sitting. There is admiration for the author's decision to tell a "local" story set in a distant place. Perhaps, above all, we are reminded that in history New Zealanders constantly pop up in the most unexpected places', OTago Daily Times (22 February 2020).

'One does not need to be convinced by counter-factual histories to accept the author's basic point - the defence of the college, orchestrated by the Anzacs, was critically important in determining the shape of events during the rising and, in this regard, the impact of this group of New Zealanders on Irish history was far from minimal ... Recent months have witnessed the spectacle of Irish history returning to a simplistic comic book interpretation of the past. Based on thorough archival research, Dr Sweetman's work pursues a balanced, emotive approach that is an important corrective to that type of thinking. Trinity's Anzac defenders are not presented as either heroes or villains, rather complex actors dealing with a city and world at war.' Gerard Horn, Dublin Review of Books (2020).

'Sweetman, as has come to be expected in his writing, emphasises the need for historians to constantly interrogate their sources, taking nothing as given. His use of evidence gleaned from archives in six countries, his ability to turn up previously ignored fragments, is impressive ... The author's combing of newspapers and periodicals has been extensive, the whole of the research well backed by wide reading in the secondary literature...As a New Zealand citizen of Irish origin, Dr Sweetman felt impelled to do those otherwise undistinguished soldiers from his adopted country justice; as an Irish citizen of New Zealand origin, this reviewer is glad he has done so.' Brad Patterson, Journal of New Zealand Studies NS30 (2020). 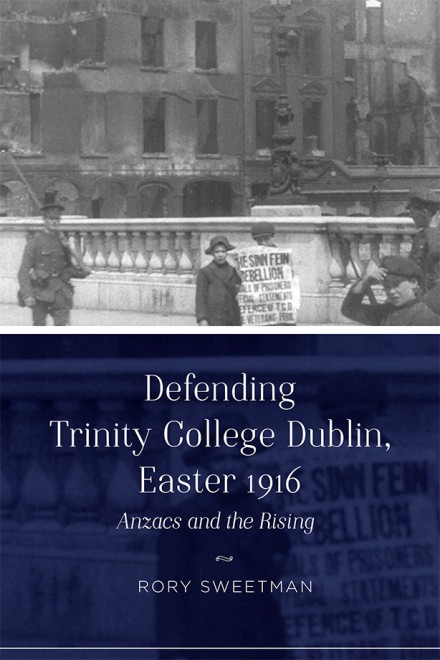