A university in living memory

This book tells the story of University College Galway from 1930 to 1980, through the reminiscences of dozens of people who were there. Interviews were conducted with everyone from college presidents to grounds staff, from students who began their college lives in the 1930s to the post-free-education student activists of the 1970s.

There are tales of lady superintendents supervising the moral well being of female students; of dodgy digs; of eccentric professors; and of maternal tea ladies. There are scholarship students coming to Galway with a single change of clothes and very little else except a keen desire for knowledge; demobbed American GIs coming to study medicine in the 1950s and creating quite an impression on the female population; army cadets, nuns and brothers who made up quite distinct strands of the student population; and generations of ordinary students from every part of the country and every socioeconomic background, who came to UCG for a good education – and to have some fun.

Based on ‘The University in Living Memory’, an oral history project initiated by the National University of Ireland Galway in 2007, this is a portrait of a university that changed considerably over time, but retains the affection of those who have been associated with it over many decades.

Jackie Uí Chionna teaches history at the National University of Ireland Galway. Her biography of Galway businessman and politician Martin ‘Máirtín Mór’ McDonogh, He was Galway, was published by Four Courts Press in 2016. She is writing a biography of music scholar and code-breaker Emily Anderson OBE. 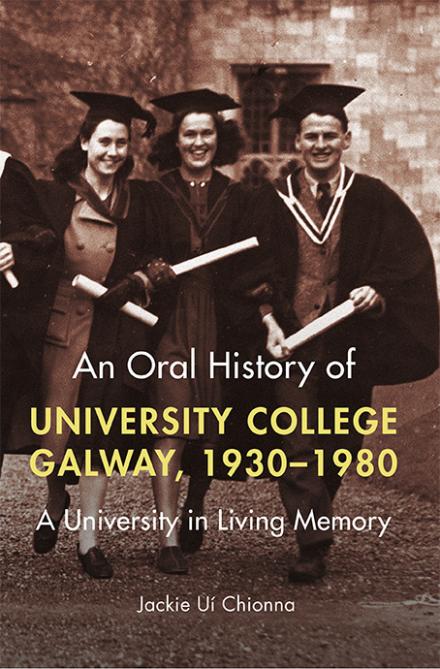