The Redmonds and Waterford

For sixty years the Redmonds – John, his son William Archer and his daughter-in-law Bridget – dominated the politics of Waterford city. From 1891 to 1922 a Redmond represented Waterford at Westminster and from 1923 until the death of Bridget Redmond in 1952, in Leinster House. John Redmond forged a bond with the people of Waterford, especially the workers there, a bond that transferred to William and to Bridget. In November 1891, John Redmond was facing the possible end of his political career. He had resigned his parliamentary seat in Wexford to fight Parnell’s old seat in Cork but was decisively beaten in the by-election. He was saved from political obscurity by his triumph in a bitter electoral  struggle in Waterford city against no less an opponent than Michael Davitt. He retained that seat and the loyalty of the people in Waterford until his death in 1918. Against the rising tide of Sinn Féin, his son William held the seat in a by-election in March 1918 and again in the general election in December that year. That victory was the only one won by the Irish Parliamentary Party in the south of Ireland – a testimony to the enduring bond between the Redmonds and Waterford. Elected to Dáil Éireann in 1923, he formed and led the ill-fated National League in 1926 and after the demise of that party he joined Cumann na nGaedheal. After his sudden death in 1932 he was succeeded by his widow, Bridget. For almost twenty years she worked tirelessly for her constituents and also played a role on the national stage in Dáil Éireann. This wide-ranging study offers a new insight into the political career of John Redmond and tells the story of William and Bridget Redmond.

Pat McCarthy, a native of Waterford city, holds a PhD and an MBA from UCD and worked for many years in the pharmaceutical manufacturing sector. He is the author of The Irish Revolution, 1912–23: Waterford (Dublin, 2015) and Waterford and the 1916 Rising (Waterford, 2016). 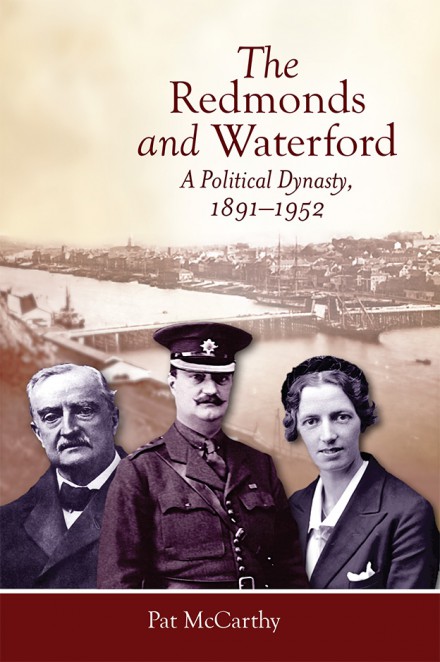