The Irish brigade in the Pope’s army 1860

In 1860, some 1,300 young men from Ireland answered the call to cross Europe and defend Pope Pius IX’s Papal States, the territory he ruled on the Italian Peninsula, from advancing armies. Even as many in Ireland dreamed of unity, independence and an end to foreign domination, this Irish brigade allied themselves in Italy against those pursuing those same goals for themselves.

As the Irish arrived, King Victor Emmanuel II’s well-trained, well-organized, battle-tested Piedmontese army was advancing towards the Papal States from the north. Giuseppe Garibaldi, the most famous revolutionary of his day, was advancing from the south with his ‘red shirt’ guerrillas. Their joint goal: to unite the peoples and states of the peninsula. The pope’s poorly defended territory, stretched across its middle, stood squarely in the way. Alongside other international volunteers, the Irish fought and died for the pope at Perugia, Spoleto, Castelfidardo and Ancona. After the defeat of the pope’s forces, the Irish were imprisoned at Genoa, before being allowed to journey home, where they received a heroes’ welcome.

This book looks at post-Famine Ireland and Risorgimento Italy, considering the interplay between nationalism and religion. It examines the recruitment, motivations and experiences of the members of the Irish brigade, tells the stories of the battles they fought, and includes a list of brigade members.

Donal Corcoran holds a PhD in history from University College Cork, and is the author of Freedom to achieve freedom, the Irish Free State, 1922–1932 (Dublin, 2013). His great-grandfather was a member of the Irish brigade. 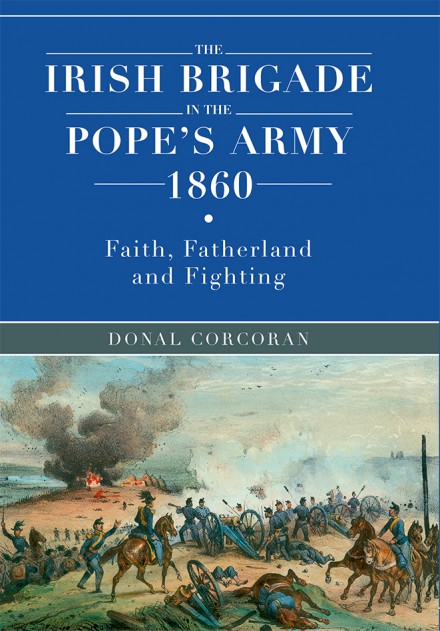