The Lives of Ciarán of Clonmacnoise, Ciarán of Seir, Colmán of Lynally and Fíonán of Kinnitty

Lying just south of the line that divided Ireland’s two halves, Leath Chuinn to the north and Leath Mhogha to the south, the churches of the present county of Offaly could scarcely have been other than places of exceptional importance. A vision attributed to Finnian of Clonard saw a silver moon rise above Clonmacnoise that brought brightness and light to the mid-parts of Ireland, and another vision attributed to Ciarán himself showed the shadow of his church protecting every part of the country, north and south. For its part, Seirkieran laid claim to having been one of the first churches founded in Ireland, by its saint, another Ciarán, who was acting on instructions received from St Patrick, before the latter ever brought Christianity to the country. Seirkieran had a claim to cathedral status in Ossory over a long period. Lynally’s patron Colmán was of northern origin and his church provided abbots to certain northern churches over several centuries. By way of contrast, Kinnitty’s saint Fíonán was reputedly of Kerry origin, and this is reflected in the Life written for him, which brings him down to west Munster on numerous occasions. Connections such as these bear witness to the important role played by the churches of Offaly in the history of early Irish Christianity. The four Lives in this volume, which are translated from Latin originals, contain much of interest countrywide.

Pádraig Ó Riain is Professor Emeritus of Early and Medieval Irish at University College Cork. He is a former holder of the Parnell Fellowship at Magdalene College, University of Cambridge, and was the first Irish scholar to be awarded the Humboldt Prize. Professor Ó Riain is the author of numerous publications on Irish hagiography, place-names, personal names, and textual transmission. he is the author of the best-selling Dictionary of Irish Saints (2011). 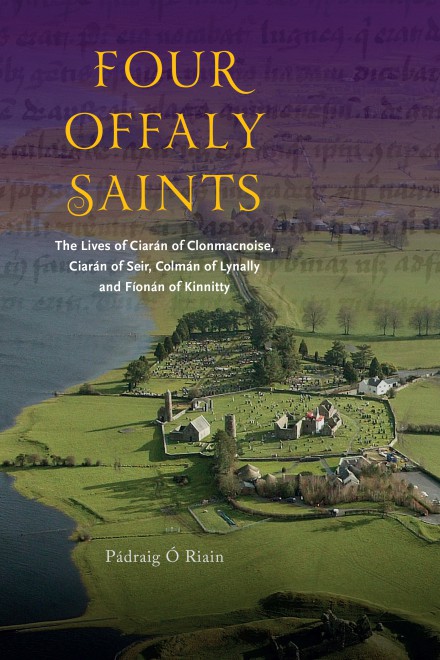