Epigraphy in an intermedial context

Epigraphy refers to inscriptions on hard material such as stone, metal and wood. As a discipline, it is often considered to be part of the literary sources written in a certain language or recorded in a certain area. However, because of their materiality, epigraphic monuments do not consist only and foremost of verbal communication; the written text represents only one of several components constituting this kind of communication. Further elements, such as the visual component and the layout, as well as the location of the monuments in a landscape or in a specific context, all interact to convey a joint message. This book is a collection of essays on Viking Age and medieval epigraphy from Northern Europe from a perspective of intermediality, arguing for an interdisciplinary study of all epigraphic sources from a common period.

The contributions discuss conceivable considerations that lie behind the choice of medium for a written message, and other features that accompany the script such as pictures and different types of naturalistic and non-naturalistic decorations. When studying epigraphic texts we are also dealing with archaeological finds embedded in a particular context. An inscribed artifact is therefore a multifaceted object of investigation; it calls for an interdisciplinary approach in an intermedial perspective.

Alessia Bauer (Ludvig-Maximillians U München), Elise Kleivane (U Oslo) and Terje Spurkland (U Oslo) all work in the field of medieval written communication. They believe that Viking Age and medieval epigraphy should be regarded as literacy ‘carved in stone’. 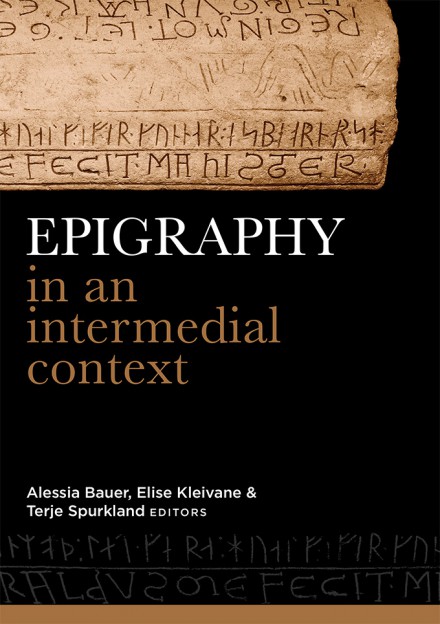