The building site in eighteenth-century Ireland

'This book derives from the late Arthur Gibney’s pioneering thesis on 18th-century Irish building practice ... A prize-winning modern architect, his grasp of project management informs his entertaining chronicle of the trade guilds’ resistance to the introduction of general contracts ... an important work of reference', Frederick O’Dwyer, Irish Arts Review (Winter 2017).

'[The editors] have performed a considerable service to the field of Irish architectural history by opening up Gibney’s research to a wider audience. Gibney brings to the work his experience as a practising architect as well as a historian ... The publication benefits greatly from a revised and enlarged bibliography, reflecting research conducted since Gibney wrote his thesis', Cathal Moore, Dublin Review of Books (January 2018).

'[A] great introduction to anyone interested in seeing how building practices evolved in Ireland during the eighteenth century and how these mirrored social and political developments. The book is a tribute to Gibney, who is normally associated with modern designs, but who was obviously passionately interested in knowing about how things worked in the 1700s when so many of our fine buildings were erected', Oliver O’Hanlon, Irish Studies Review (Dec. 2018).

'Gibney's scrupulous research into eighteenth-century building practices is a treasure trove of lore that will intrigue and entertain in equal measure. Since its publication, this book has become an essential historiographical resource for architectural historians, shining new light on the visual interpretation of our architectural heritage. Gibney's scrutiny and considerable expertise ensures that we all know what we are looking at now', Carol Pollard, Irish Historical Studies (May 2019).

'A useful guide to building techniques and practices in Ireland from the later seventeenth century to the end of the eighteenth … Gibney's research on the various disciplines within the skilled artisan building world of Ireland in the eighteenth century, has led to a book dense with original material from this rich but under explored field ... The building site in eighteenth-century Ireland by Arthur Gibney elucidates a period of creativity and industry, which is associated with many of the finest country houses, public works, and Dublin city squares and terraces, and gives us a working history of the highly-trained and versatile builders and craftsmen who constructed them.’ Jeremy Musson, Construction History (Volume 33, No. 1, 2018). 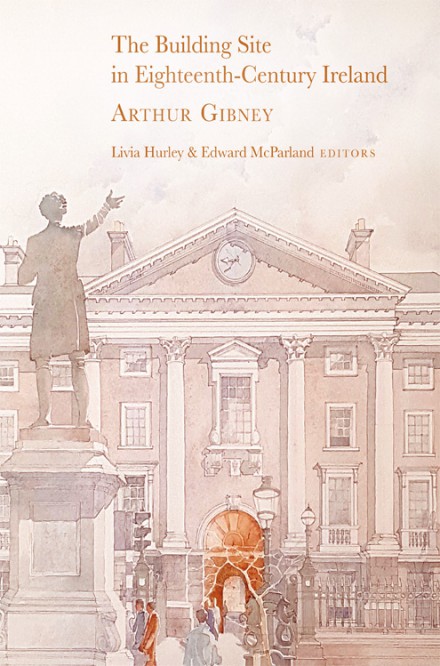